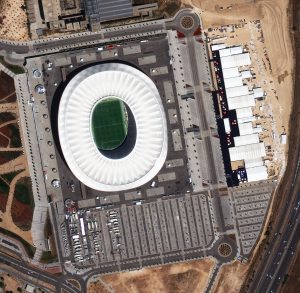 As June arrives it might be a nice time to get outside and enjoy a socially-distanced work break?! But before you head out on that much needed COVID leg stretching session, check out this 30-cm WorldView-3 image collected on the day of the 2019 UEFA Championship at Stadium Wanda Metropolitano in Madrid, Spain. The UEFA Championship is the final game of a yearly tournament which features the best European soccer club teams. The 2019 edition of the championship featured two English Premier League teams, the Tottenham Hotspur and Liverpool, and it kicked off at 21:00 CEST – while the 30-cm WorldView-3 image featured here was collected at 13:36 CEST hence it only captures the pre-game setup on June 1st. The game was eventually won 2 – 0 by Liverpool who secured their sixth UEFA Championship – congrats!