WorldView-2 Satellite Images of Notre Dame Cathedral Before and After the April 15, 2019 Fire 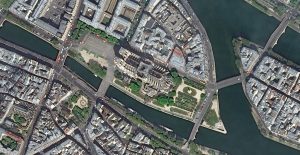 On the morning of Monday April 15th I was at our office in Boulder, Colorado when news about flames engulfing Notre Dame Cathedral’s main spire broke. My attention was on Notre Dame all day as was the attention of many across the globe; and while the scope of the tragic fires were not apparent when I went to bed, we did at least get news that the cathedral would be saved from the flames.

As France starts the process of rebuilding the historic site which could take five years or more, here is our humble homage to Notre Dame as seen by the 50-centimeter satellite, WorldView-2, from hundreds of miles up in space. The first image here was collected on February 13, 2019 – it was the last cloud free image collected of Notre Dame by WorldView-2 before the April fire. Apologies about the deep shadows in this February image as the sun is low in the sky in the winter making shadows more prominent and the colors less intense.

The second 50-cm WorldView-2 image was collected just two days after flames engulfed Notre Dame on April 17th. In this image, you can see that the spire is gone and that the wooden roof has been destroyed. You can also see the first pieces of scaffolding which will eventually surround the cathedral during the rebuild.

The final image is an animation of the two 50-cm WorldView-2 images from February and April 2019 with a four second delay between the slides changing. While these images have been collected at opposing angles, the animation helps illustrate just how much damage was done to the rooftop of Notre Dame.

One response to “WorldView-2 Satellite Images of Notre Dame Cathedral Before and After the April 15, 2019 Fire”