The Soft Core of the Earth – Worn Out Welcomes

When do you know if you’ve worn out your welcome? It’s easier with a single individual, I imagine, because people typically aren’t very good at hiding their frustration or annoyances. With a larger group, it can be harder to read the room, and there will be varying degrees of irritation, some folks might still want you around – or at least not care one way or the other. But what about with a city? Can you wear out your welcome with a place?

Obviously, a geographic location cannot get frustrated or affected by humans – though Mother Nature must be about sick of humans – but a municipality is indiscriminate in its indifference (unless you factor in the bureaucrats that make the decisions, then policy can certainly be skewed against a single group). I’ve bounced all over the country, sometimes rhythmically and with intention, other times absentmindedly, wandering wherever the wind blows. One thing is for sure, though, I rarely last very long in any one place, even if in some instances I return. But in terms of setting down roots and committing myself to a place, that really has never happened as an adult. Until recently, the longest I’d been in one place consecutively was three years, and it’s safe to say that even in those few three-year stretches I was eager to get out before I did. Sometimes I’ll make the decision to set sail seemingly without thought and almost instantaneously, other times the desire festers for a long time before I just can’t take it anymore. Then I depart.

What is it about a place that makes me, eventually, feel the need to move on? Obviously, some places just suck because they’re ugly, they’re expensive, there’s nothing to do there, or the weather is terrible; I’ve lived in places that had those issues, most of them checked a few of those boxes. But if a place is reasonably affordable, somewhat aesthetically pleasing, and has a multitude of social and recreational offerings, then how could a person burn out on it? Well, the people, clearly. People ruin everything, and that certainly can be said about places. They’ve factored into a few of my moves along the way, that’s for sure. Knowing that people suck, and that there will be people everywhere you go (assuming you want to live in a city and have access to basic amenities), then that must be accepted. Maybe the bitter pill is hard to swallow, but we must accept the inevitable, don’t we?

Where I’m at now I’ve been for over five years. It isn’t expensive, it does have some natural beauty, the weather is quite pleasant six months of the year (the other six are brutally hot and humid), and there really is an abundance of social and recreational outlets in the city, with several other municipalities relatively close by with numerous other offerings. The people suck the way people suck, but they’re certainly not as bad as some of the places I’ve been, so all things considered, how could this place be wearing on me? It likely couldn’t get too much better anywhere else (could it?). I think the issue is that I just get bored, even if it’s boredom from comfort (another perspective on the “tyranny of convenience” a la Tim Wu). I could easily ride out my life here, though I know I’d always long for somewhere else. And even if I were to move to some other place I thought would be ideal, likely it would also lose its luster over time. Stuck in a purgatory of my own making – never content.

So, maybe it isn’t me who has worn out their welcome, but the place I currently reside has worn out its welcome with me. Somehow, I’m able to hold in balance with this position that the grass ain’t always greener, something I’m more than aware of. I don’t want buyer’s remorse associated with moving on, I’ve had it before, and it’s expensive in more ways than one, yet I also am steeped in wanderlust and longing for something that might be better fitting for me. The thing is, I don’t know if it’s out there. Sure, we all create in our heads this image of what we aspire to, but it’s just that – an image. More than likely a simulacrum of something that no longer exists, or worse, a mythological representation of something that never did. 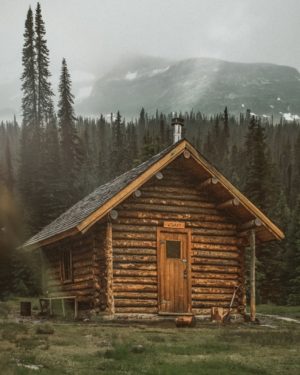 I hope I make it here sooner than later; this place I’m at now is getting to me. (Image retrieved from https://unsplash.com/s/photos/cabin and comes courtesy of Zachary Kyra-Derksen)

I’m getting close to 20 years out from retirement age (65), and I’ve already started counting the days. In fact, I’ll be pressing pause on the writing of this here essay to meet with my financial planner to see how I can retire earlier, at 59, preferably. I’ve amassed some savings and investments, but I’m betting she’ll tell me 59 isn’t reasonable unless I cut 99% of my discretionary spending. No more trips out west to hike, no more seeing 50 concerts a year, no more eating out 6-7 times a week, no more beer, no more buying any book that looks even remotely interesting. Probably can’t afford my dog anymore, either…

Well, I’m back! So, it looks like I’m going to have get a little more frugal, cut out some things that just aren’t necessary if I want to retire at 59. It appears I’m about 80% on target to do so, should everything stand, and the financial market not crash again like it does every friggin’ five years or so. For reasons other than economic, I’ve already decided to get rid of a smartphone (being always connected to the internet is the work of the devil), so my bill should go down from about $58 to $20/month. I’ve been subscribing to my local newspaper for about 4+ years now, and while I think it is truly important to support local journalism, it ain’t that great here, so there’s another $350-400/year I could save myself. In pre-pandemic times I saw on average one concert a week, and now that things have started to open back up, I could be a little more intentional about the shows I choose to see; maybe I could cut that in half. Where else? I’ll have to look. Time to start hustling!

Maybe if I shift my focus to the future, I can squelch my restlessness and desire to search out greener – or at least newer – pastures. It’s pretty cheap to live where I do, and there are a lot of hidden costs that could jump out and surprise me if I moved on, even if to a location with a similar cost of living and pay. I think as I’ve aged, especially of late, I’ve gotten much better about deemphasizing the role of money in my life, so I don’t know if it’s ironic that now my focus has shifted back to money – even if it’s pragmatic and looking towards the future. I guess, if anything, this is good, though – having a goal, cinching in the belt a little, and saving for the future. If my plans change, having set aside a few extra dollars will always be a good thing…

The thing is, I know I won’t be able to fully shake the “what could be” thoughts from my head. I’ve always been nomadic, both in a literal and figurative sense, and try as I might, suppressing any desire for 15 years ain’t easy. So, do I need to make amends with the place I live now, tell her I’m going to stick around for a while, we need to make it work, you know, for the kids – I mean cabin out west in 15 years? I’ve spent my whole life wearing out my welcome or getting frustrated with where I’ve been, where I’m at, and/or where I’m going. Now that I’ve got a goal, finally, I need to eat my medicine and tough it out. Smile through the pain. Say, “Yes, dear.” Play nice. All that jazz. If and when I finally make it there, the greeting outside my door will be, “Don’t wear out your welcome.”