It didn’t take long for Americans to be over the whole coronavirus thing – I mean, obviously there were those who didn’t want anything to do with it from the beginning, and their actions (or lack thereof) evidenced that. But those who willingly played along for the good of their own health, and maybe that of others residually, have started to show chinks in the armor. Hell, the armor is mostly off by now. Driving across the country this summer I saw a number of large pockets of Americans who had no interest in letting the coronavirus impact their daily lives, something that is/was frankly easy to do, especially if it doesn’t directly affect you. By the time this comes out, likely 200,000 people will have died in the United States, and more than 5 million will have been infected – but those are relatively small figures compared to the 330 million who live here, so, again, if you haven’t been directly impacted, it’s not hard to see why people aren’t taking it seriously. I mean, I’ve certainly relaxed my behaviors over time, not because I think I’m not susceptible to catching “it,” but because it’s easy to be careless and take shortcuts, and the science is still fuzzy – and the messages from the top are certainly still misleading and ambiguous, even when dotted with factual information from trustworthy sources. Plus, there’s a whole other set of problems that have worked their way into my purview (social unrest, the onset of another possible Depression, the divisive political climate), so maybe I’m just ready to throw caution to the wind. If you look around, many people already have.

The younger generations, mostly the college-aged kids, are getting the most flak for not taking things seriously and becoming super-spreaders. They’re easy scapegoats, but older folks are just as guilty of being lax, even though they’re mostly not taking part in overcrowded parties (though some certainly are). Way-of-Life has trumped (pun intended?) common sense, and people want what they want; who can blame them? So do I. In my adopted hometown, we’ve relaxed the rules for bars and clubs and music venues through some cute little loopholes: as long as you serve some type of food, your doors can stay open, even if those establishments that predominately, and honestly, thrive on alcohol sales must close at 11pm. Obviously, you can’t catch ‘rona before 11pm. We’ve also got an “open streets” initiative where all of the restaurants downtown get to use the streets as their dining room. Sure, it’s open air, but when there are hundreds of people in a 2-3 block stretch, even if spaced out by 6-feet, none wearing masks (they’re eating and drinking, so they can’t), it follows that there could be some easy transmission. But I’m sympathetic. The thing I miss most is live music, and I almost went to see a Guns n’ Roses cover band the other day at an indoor venue, but my friend bailed at the last minute and I didn’t think potential death from cover bands was worth it by myself. The safety precautions the venue put into place: 1) everyone must buy food (you get a hotdog with every ticket purchased) – (yes, I know that is not for safety); 2) masks must be worn while inside except when at the table; 3) no more than 6 people per table; 4) no intermingling with other tables; 5) capacity has been reduced from 500 to 125; and 6) table service only. Alright, those are pretty good steps, certainly better than the butts-to-nuts free-for-all that typically takes place at concerts, but are they adequate, really? 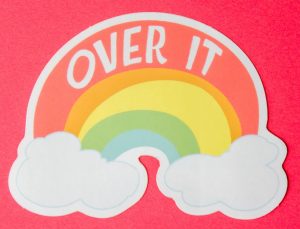 Somewhere, over the rainbow… We’re over it…

I get the economic and livelihood argument just as well as anyone. I will be one of the saddest people on the planet if all of my beloved indie concert venues and mom and pop restaurants close because they can’t weather the storm of the coronavirus, but I also question the forms of damage control that have been put in place; are they really helpful? I’m starting to think they’re a finger in the dyke kind of situation, and the water is just rushing out elsewhere. Why don’t we just throw all caution to the wind and go back to how things were pre-covid? Sure, we’d have a lot more infections, a lot more death, but at least we would do it with American style.

If and when this mess gets all cleared up, what will be here to stay? People thought teleconferencing might be, but now that the inadequacies of it have been exposed (“Zoom fatigue,” the distractions of home life, etc.), and the fact that humans are hyper-social, I’m guessing that won’t be championed by too many. Masks might become more common – I like them to help ward off the ever-growing surveillance state, but they make looking at pretty women far less fun. The physical spacing between people (I never want to hear “social distancing” again, or for that matter, “unprecedented”) might endure, but on my daily walks with my dog I’ve already grown weary of giving way and making wide berth for others. That in its own right has become a power struggle. It’s kind of like a game of chicken these days, seeing who will move first. Every time it is a white male under 40 running, they never bite. Runners are conceited jerks anyhow, so that is not surprising. They’re not as bad as cyclists, the type who wear those ridiculous Tour de France getups. But at least they do so on the street. Don’t get me wrong, I love exercise, I walk the dog at least 90 minutes a day, and I ride my bike for transportation as often as I can. But runners and cyclists, I don’t know. They’re not as bad as the CrossFit people, but at least they stay in their buildings. I digress, as usual… Airplanes; I have no desire to get back on one of those anytime soon, though I hated flying long before ‘rona reared her ugly head. Having said that, assuming the world allows me to, I have a couple of flights planned for May and July, so yeah, life will eventually go back to “normal” for most, I’m thinking.

I’ve read a lot of stories recently on how the well-to-do are making their vacation homes their permanent homes in all the glorious little idyllic towns across the country (you know, places like Vail and Jackson Hole). So, that’ll drive up prices for those of us who can’t afford to do that but still like to visit and play in those areas. Transplants typically bring their snobbishness and I-know-better-than-you attitudes (I should know, I’ve transplanted many times), so, over time, they erode the culture of those places. Supposedly people are exiting the big cities in droves, but I don’t see that lasting long, especially not with the new crop of whiny Gen Z, iGen, post-millennials, or whatever they’re called; those who have suffered at the hands of their lawnmower parents (run down all obstacles in their way). Once they start to get the taste for individuality, likely around 30, they’ll be seeking out city centers where they can always be protected in their safe spaces and have their army of SJWs guard them from every possible offense, challenge, and hardship – places like NYC and Chicago will turn from the places where people embrace the grittiness to lands of stuffed comfort animals and vision boards of inspiration. So, all of the cities will shift and change in their personas, and none of it will be for good.

I’ve also read several stories about how going outdoors has really filled the gaps of the typical resort and tourist-style vacations most liberal suburbanites and woke jokers have depended on as surrogates of their identities; that’s not good. I mean, it is good that people are embracing the wonder and beauty of natural resources, but not only are we going to get into a “loving it to death” kind of situation, those scabs will corrupt it like they do everything else. Glamping, trash, excessive noise, congestion, and the general inability to leave the built world and society behind, all of that will overflow our natural beauty and impact it for the worse, likely forever. It was already bad enough that many natural oases were the breeding grounds of rednecks who, more often than not, treat it like their toilet and trailer (trust me, I’ve cleaned up more used tampons and shit-laden toilet paper than I’d like to admit just so I can try to enjoy my time outdoors). Now we’ve got teeny-boppers and suburban weekend warriors swooping in too. You want to talk about culture wars? The streets have already had their battles, and soon the trails will have them too. It’s not getting any better, people.

Yeah, I know, I’m an optimist. What can I say? 😊 One of these days, eventually, it’s already started happening for many, people are just going to be like, “F*** it.” I’m going to do what I want, when I want, pandemic be damned. We’ll likely lose a lot more people, but that’s the American way: get what you want, when you want it. And if you can’t, find someone to complain to, and do it loud enough and long enough, they’ll grant your wishes. We’re all toddlers, every single one of us.