The Soft Core of the Earth – The End of the World

R.E.M.’s radio-friendly sing-along, “It’s the end of the world as we know it,” came out in 1987, and while I was well into my addiction to MTV by then, I don’t remember its release or place in the rotation of songs that year. I’m sure I heard it, and I’m sure I liked it, but it wasn’t for a few years after that until I really absorbed the song when a friend gave me a cassette single of it. The tape had all the text wiped off it, so it was blank white, but it was still in the cardboard sleeve that came with those things back in the day. I don’t think my personality of today was anywhere near gelled at that point (I likely would’ve been about 13 or so when he gave it to me), but apparently the seeds were planted for the misanthrope (see last month’s column) and cynic that I have become. Sure, it’s a super catchy song to sing along to with a great melody, and undoubtedly, I enjoyed that part, but there was something more to it for sure. There’s just something hedonistic (or nihilistic, maybe) about merrily singing about the end of life as we know it and being fine watching the world burn before your eyes. While this happened metaphorically many times in my personal life, and literally with climate change as well, it also seems to be happening in another slow burn in Ukraine today. I fear we’re watching the onslaught of WWIII, and while many are concerned in the West, I think we’re all too ignorant, arrogant, and/or selfish to assume it will come to our shore. I wouldn’t be too sure about that. (As of the time of writing, Ukraine is putting up a hell of a fight, and I’m in their corner!)

It seems a lot of structures, both literal and metaphorical, are crumbling around the world these days. I’m not terribly worldly or well-traveled, and I can’t speak to the specifics of what’s going on outside our border, so because of that I’ll keep my diatribe to all things stateside. One doesn’t have to be too “with it” to know that the political fractures have become cleavages, and the middle has given up the fight in this country. Now, I’m not a centrist per se (and I’m certainly not blindly of the Right or Left), but I do see the value in common ground, compromise, and seeking consensus (though those who know me in my personal life would say I’m a lot less likely to ever give any ground, often capable of brief volatile rants, and opinionated as they come). 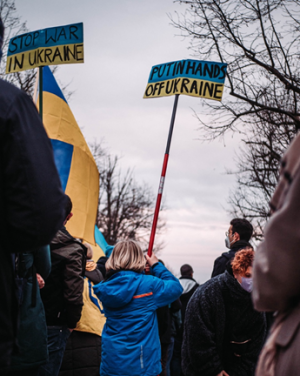 Piss off, Putin! (Image retrieved from https://www.pexels.com/photo/back-view-of-a-young-girl-protesting-against-war-11284546/ and comes courtesy of Matti)

Having said that, there are several closely held beliefs that do skew to either end of the political/ideological spectrum. For instance, I believe myself to be a staunch environmentalist (though you wouldn’t know it by the amount of driving I do), and that tends to be of the Left. I think we should do everything we can to conserve as much of our natural resources as possible, and I also think we should police our public lands better to catch all the litterers, arsonists, poachers, snaggers, and general all-around jackasses. Save our natural beauty for the people who actually treasure and care for the environment; that’s fairly Far Left thinking.

I’m also an ardent non-interventionist (I see the rest of the world’s problems as their own – I don’t think we should meddle until we get our own house in order first), and that trends libertarian. I see great value in supporting and expanding the scope of public education, another leftist attribute. There are a few positions I hold that don’t have firm ideological designations as well. I still question taxes on our labor, another libertarian lean, but I hold that in balance with an asterisk that, based on cost of living, that should only apply to those making under a certain amount of money (say roughly $400k), a “progressive” position. I believe in a strong Defense but am anti-militarism (see above about interventionism, and yes, there is a difference). And I like the Post Office (seems to be more of a Blue thing than a Red thing these days, though old folks love it and they tend to trend Red) to name a few.

Others are just outliers, like my belief that all boys should have a vasectomy at birth so they have to want to have kids and be able to afford them before they get the snip reversed; and I also am anti-tax credits for children but fully support programs for early education and daycare to allow parents to work and support themselves. In other words, let’s do whatever we can to discourage people from having children and certainly not incentivize them or pay them to do so, but once those little resource-suckers get here, we might as well support them and set them up for success as much as possible. That’s correct, I’m not a fan of kids.

I also think people should have to be vetted to get pets – it’s way too easy and people neglect and abuse their animals way too much. I also think we shouldn’t allow certain types of animals to be pets: exotic and dangerous creatures because most humans that would want one are the exact kind who shouldn’t have them; and little critters like hamsters and gerbils are just walking into certain horrific death – that parents think any live animal exists to train their crappy little kid to be responsible is horrific by itself. Perhaps viewed as oddly paradoxical by some readers, I have no problem with subsistence hunting – I think anyone who eats meat should have to kill and clean an animal once in their lives. But I’m very much against trophy hunting. Basically, I hate people (again, see last month’s column) and really like animals.

I believe we should have higher use-taxes, especially on things like gasoline (see my environmentalist comment above), as well as junk food and fast food and other things that generally make people and the planet less healthy, which would include single-use plastics. I imagine some lefties could get behind some of this, but many would probably say I’m being too elitist and hitting poor folks while they’re down. Maybe the song I should’ve cued up is Tears For Fears’ “Everybody Wants to Rule the World” instead – might be more in line with my polemic. Anyways, let me get us back on track…

As the world burns around us, we’re forced to reckon with the rising tide of authoritarianism all around us. I actually think I’d make a pretty good authoritarian ruler, and I don’t think I’d be as corrupted by power as much as most would. You see, I’ve already settled into my comfort zone with my current corrupt tendencies, so as outlined above, I’d just be seeking to enforce those basic standards. I know the 3-4 of you who read this column are likely breeders and took offense to my comments about kids, but c’mon, you know you are part of the problem. Everything else you could probably get behind: lower taxes, a cleaner environment, and less deadbeats and evildoers in the world. Right?

During the summer of 2020 I bought a shotgun for home defense. I was convinced something was going to happen during the election that year that would justify the purchase. Thankfully I haven’t had to blow anyone of my doorstep (yet), but I remain unconvinced that the political turmoil in our country has subsided. In fact, I think a high tide tsunami is going to crash down on us in the next two years or so and most of us will be unprepared for what comes because it won’t be what most expect. Folks talk about the next “civil war” here in the States, and I think that’s a safe bet, though it won’t be like the 1860s, it will be a cold civil war with isolated flare-ups of hostilities. More fractures are forthcoming. Of course, this will all take place in the periphery of the global disorder now underway, and even if the Ukrainians are able to hold off Putin for now, the flip has been switched and other authoritarians will move forward, and Russia will not be so easy to give up.

When it all comes down on us, when disorder surrounds us and the doomsday preppers don’t look so ridiculous any longer, where will you be? Where will you go? I no longer have a tape deck in my car, but I still have my cassette single of “It’s the end of the world as we know it.” The cloud will have crashed and everything in our lives that we’ve entrusted to the digital world will vanish, and physical trinkets and heirlooms will regain their tossed-aside value. After our cultural accomplishments and books have been destroyed or forgotten, there will be a need to rebuild society and wisdom. I’ll come across someone who does have a tape player, and they won’t be ready for the words they’ll hear when I pop in the cassette: “Eye of a hurricane, listen to yourself churn, world serves its own needs, dummy serve your own needs… It’s the end of the world as we know it, and I feel fine…”