The Soft Core of the Earth – Stupid People

Most people in this country are stupid.

Some don’t have adequate formal education – and others simply don’t take advantage of it, and some lack natural intelligence; but the most concerning are the willfully ignorant, a group who seemingly makes up more and more Americans, and whose numbers are on the rise. And neither those on the political Left nor the political Right are immune from this degradation of collective intelligence or civic responsibility.

Misinformation, disinformation and groupthink fuel the fires of ignorance, and public pressure causes people to adopt positions they may not otherwise take, simply to not upset their tribe. It seems these days it is easier to ride for the brand than it is to stand for what’s right.

Now that every topic has become politicized, objectivity and reason have been removed from public discourse, and all positions and decisions are based solely on feelings and identity. Stupidity as a symptom of ideological affiliation has become algorithmic in its predictability, as knowing an individuals’ political beliefs allows us to target with surgical precision their position on any number of other social issues. Inherited and untested beliefs beget complacency and prevent critical thinking. 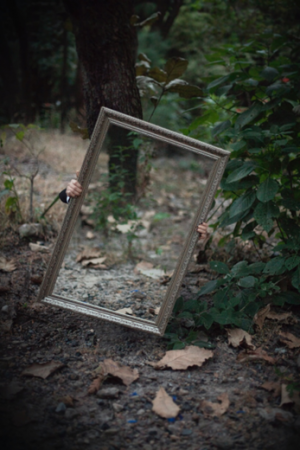 Look closely. Are you part of the problem? (Image retrieved from https://www.pexels.com/photo/rectangular-wooden-frame-mirror-1188410/ and comes courtesy of Marian Blue)

This should all be glaringly obvious. However, we must accept that it’s perfectly understandable that no one would want to be seen as wrong. It can be quite a blow to the ego to admit the err of our ways.

These days, though, people put saving face over facing reality. With it comes to the dissolution of norms and objectivity, as well as an echo chamber of confusion that leaves us seeing the world through the looking glass – everything is upside down and distorted. This leads either to disengagement and apathy or to blind allegiance to causes unworthy of support.

Though, it is not solely political ideology that feeds the stupidity pandemic, as researchers have noted a decrease in average IQ over the last few decades. Some studies suggest that nutrition, changes in the educational system, and the omnipresence of screens and social media play significant factors in the sea change of ignorance. Each of these is certainly amplified by the blindness of ideological faith that’s infected our political discourse.

As a society, are we destined to be bystanders to the implosion of our civilization? If we were to wager based on the evidence of recent history, it would be easy money.

There is no single source to attribute as the fountain of our collective demise. People are reading books less and less every year, suggesting a loss of interest in building knowledge or confronting different opinions, and the ‘reading’ that has replaced it is typically confined to headlines and the first few sentences of a paragraph online. Often these sources are biased and untrustworthy. Postmodernism has chewed up and spit out objectivity.

The type of shallow engagement that has become endemic to our society leads to snap judgments and incomplete knowledge. Anything that doesn’t ring true to one’s belief system is dismissed outright. Dogma and indoctrination have spread from the houses of the holy to set up camp on ideological islands surrounded by the seas of ignorance. And as we know, the waters are rising, in no small part due to climate change.

I suspect that many reading this column dismiss me as biased, an elitist who doesn’t understand things the way regular folks do. But that’s just it: no longer is there any subject that everyone agrees on. It seems most of us just aren’t capable of being objective or distinguishing between truth and fact. I guess I’m being willfully ignorant in thinking anything could change in late-stage capitalism.

And maybe it’s not that Americans are inherently stupid, only that we’ve come to take pride in being so. It’s a lot easier to believe whatever fits your skewed ideological upbringing than it is to learn and accept the cold hard facts – especially when they go against what you’d prefer to believe. Stupidity yields early returns for individuals, but it produces deep debt for a society.

But, if I’m being honest, it’s not the fault of the uniformed or the disaffected. Ignorance is not a burden owned solely by individuals. No, our society encourages and facilitates apathy and disengagement, and this starts with government officials and their lack of support for building a well-educated electorate – through schooling, job training and the cultivation of an enlightened citizenry. We can only grow to the extent of our nutrition, and these days, we’re beyond distracted and living on a sugar high.