The Soft Core of the Earth – Place Meanings

The only bit of wisdom I recall ever coming up with was this one statement said over beers to a longhaul trucker, who I’d just met and never would see again, at a dive bar, when we were chatting about his next destination and my impending move to a less-than-desirable state. I said, “Place is a subjective reality, largely dependent on your expectations.” I guess the sentiment was that I was going to do a job and that was going to be my focus. I only had to hate it if I expected that I would. In my case, I was going to do a mission for a little while and then I would be free to go. I’d goofed off quite a lot until that point in my life, and lived comfortably in comfortable places, so I guess I was accepting that I had to do the dirty work of growing up. I’m not sure if I did, and I guess since I’m questioning myself here and now, the answer is probably that I did not. Anyhow, not too long after that heady statement, I started thinking about “place” a little more, and I started to learn a little more about its counterpart, the concept of “space.” You see, any geographic area is just a space; it doesn’t become a place until it is imbued with meaning. And meanings come from all over. There are historical meanings of a place, like where a battle was fought or a world record was broken, and there are individual, subjective meanings as well. What a particular location means to me might mean something starkly different to you – or it may have no meaning at all. And meanings change, too. What was once important may no longer be, and what is otherwise meaningless can be engorged with value or complexity in the blink of an eye, perhaps due to a chance romantic encounter, an accident, or any other number of things.

Over the last few years I’ve started to think about all the places I’ve lived and been, wondering how much I processed their meanings when I was there, and whether or not it matters if I process them now. I’ve started to think about all these places I’ve been as the conduit to the relationships I’ve built there – or didn’t in many cases – as they aid in the sculpting of that process. It seems that most of the places I’ve been vary on their level of significance to my memory based on the things I did there and the people I engaged with (or failed to) along the way. Some of the visits or stops, even when in less-than-desirable areas, carried more weight in my life because of who was there with me; other places, that might typically be viewed as idyllic are less so because I didn’t take the opportunity to invest in others. And the older I get, the less I seem to invest. Because I’ve bounced around a bit, and because I’m a little bit awkward in social environments, places mean less and less, even if I’m there for longer and longer periods of time. 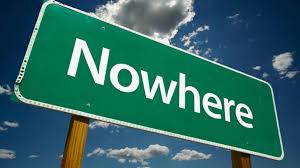 If nothing from the past has meaning, how can anything in the future?

So, what I’m trying to avoid (because I think it is a losing strategy) is the internal process of “woulda, coulda, shoulda,” you know, Monday morning quarterbacking. Everything is easier in hindsight. And if I continually wish that I’d done this or that in these past stops, well, then I unintentionally, but actively, work to diminish whatever good was accomplished there, and ultimately reduce the meaning of the place to one that lacks value; I erase it less in memory but more in staying power. I’m constantly starting from a new point because what came before me didn’t ever measure up. It’s as if I’m expecting golden horizons ahead even though the past doesn’t suggest that – which is why I’m trying to overcome the past – and its places – as being a controlling factor in my life. Easier said than done…

I’ve found that I’m constantly restless, always hasty, always impatient, never truly absorbing what comes into me – never fully extracting the nectar from the journey. In some ways, I’m like a parched traveler in the desert who stumbles onto a trough of cold water, yet when I drink it, I only come to find that my body is riddled with holes and the refreshing water trickles out before it ever gets the chance to recharge me. And as the water spills out, it renews the soil around me, but I tread away with nothing to show but a few footsteps of fast-fading memories that will soon dissipate or be corrupted to my evolving understanding of them. You see, nothing can ever be again what it once was; so how do places hold their meanings, then?

I’ve come to find that, over time, my complexity has simply been more confusing – to me and to others. I’m evolving into this multifaceted, mass of entangled interests, experiences, connections and goals, but there is a lack of synthesis – there is no union in my being. So, when I look for meaning, I try to find a firm foundation on which to anchor myself. These “places” are both physical and mental, like say aspirations, but as they’re always in flux, and always bound to my confused and uprooted wanderings, there is no sense of permanence, which makes me wonder: is that all we’re looking for? Something that is real and absolute, something to tether ourselves to? I mean, we might find this in an activity (e.g., I’m a painter, and that’s where I find my reality and comfort), a person (e.g., I’ve found the love of my life, who I want to spend the rest of it with), our occupation (e.g., I’m a farmer and I understand the soil, how to tame it, and make food), or perhaps where we’re from or where we live (e.g., I was born and raised and will die in X town). Either way, they all boil down to geography, at least eventually. A farmer can’t farm if her fields turn to desert; a painter might lose the lust for painting if there are no beautiful landscapes to capture and interpret; and if the love of your life moves away, well, do you chase her and try to retain that love and meaning in a new environment, or do you let her go and wallow in the misery of where you lost your love? As an aside, think of all of the people you’ve known who’ve either moved somewhere to be with someone, or one of the pair takes a job afar and the other trails, leading to the demise of the relationship. It happens, a lot. These places we spend time and make memories, where we love and learn, where we refine ourselves, they’re all fragile. They’re all susceptible to change. Why? Because places are simply extensions of ourselves. The tree that falls in the forest doesn’t make a sound for us to hear if we’ve moved elsewhere…

For illustration: a place I lived for a short period of time almost twenty years ago, a place I was excited to explore, but came to resent because I didn’t truly want to be there (I was happier in my original place). It was also my first time far away from familiarity (and “home,” though even that definition changed), so I was forced to adapt as much as I could, yet I found that it was harder than I’d expected. Continuity had been derailed. Well, then I moved back to that original place I started, briefly, only to find that, as Thomas Wolfe put it, “you can’t go home again,” and then soon I was on to my next destination, and my next, and so on, and so forth. You see, I never stopped to really take it all in. To really try. To really become a part of the fabric of each stop, regardless of the amount of time I was there – and therein lies another important component: the concept of time. I was frivolously wasting away my time and the potential of all these places because I was stuck in my head with preconceived notions of what I wanted without doing the necessary work or accepting that things were going to be different from what I wanted. I was continuously fighting a fight that was unwinnable. And before you knew it, I was always on the run. Never settled, never unpacked, never permanent. Always expecting some big break to come that never did. Why? Because I didn’t make it come. I didn’t try. I didn’t invest myself in any place, and because of this I never invested myself in any person, not really. My time was ticking by, and the places changed, and the meanings never came, at least not until after I left. Each stop was spent reviewing the last one and planning for the next one, never appreciating the one I was in while I was there. I said I’d do better. I never did. I haven’t yet. Will I ever?

If place is a subjective reality largely dependent on our expectations, then what do I expect for myself going forward? I can’t say. And not because I haven’t given it thought, but that I haven’t trained myself how to expect to enjoy what I’ve got. I remain flustered by insatiability in life, and that eats up my time, prevents my evolution, suppresses my potential for relationships, and causes me to take for granted these places I’ve been and where I’m at now.

Someone asked me if I were on my deathbed now, what would I most regret? While I can think of a number of things, like learning to competently play an instrument or speak another language, the biggest regret would have to be that I never allowed myself to be content where I was, when I was there. My discontent directly affects my ability to make relationships, to build connections to people in places through time. To simply be – and enjoy it. Places can have great meaning, if you let them.

Is this the place?

“This is the place where everybody finds out who they are,” said the man on the stage.

While I knew it to be simply sweet poetry sung to a tune,

I couldn’t help but wonder if he was right. Should I be finally figuring out what I’m doing?

I mean, on the grand scheme of things I do. I go to work, pay my bills, have a little fun here and there.

But I guess I don’t know why I do any of it. How I got here is just as interesting to me.

When I look back on my life, from wherever I take my last breath, will I have made it?

Made it to the end, I guess.

But made a success of it, only time can tell.

But why is success the measure? And why not happiness?

Am I a product of my environment?

Or do I have some say in it all?