The Soft Core of the Earth – Pay Me, Gov’t

If you’ve ever wondered what a day of your time is worth, just ask Big Brother. I’ll save you the trouble: a measly $12, that’s all. Well, to be fair, if you have to spend a week on their dole, it’s $20 a day, more than a week, it’s $40 a day. So, even if you only make minimum wage ($7.25) and work full-time (8 hours a day), you’d be making $58 a day, $18 more than the government sees fit to pay you for a long stretch on their payroll. What am I talking about, you might ask? Jury duty. That’s the payout. So, in last month’s column I alluded to the problems with jury duty, not to mention other people and agencies who choose to suck your time and do with you what they will. Well, now that I’ve gone through the process, let me walk you through my day of civic duty. It wasn’t productive.

I showed up at the courthouse at 8:15am. With my jury summons, I was afforded certain luxuries like bringing in a cell phone, laptop and food, items that are restricted for those who do not work there. Since I assumed I would either be selected or let go, I only brought my phone and a backlog of newspapers I hadn’t gotten to read as I had just been out of town for 4 days. Well, it didn’t take me long to skim through old news, and I’m not the type to work on my phone, so I ran out of things to occupy my time fairly quickly. At about 9:15am the deputy clerk had everyone present watch a 20-minute video on the importance of serving as a juror, something I agree with wholeheartedly, and then we were left to wait. There were roughly 65 of us in the room, and we were told we could go to the bathroom without asking. I’m not sure why that needed to be mentioned, because had I needed to go, I sure as hell wouldn’t have asked anyone, but I guess enough knuckleheads show up there that you have to walk them through every little thing. And these are the people who might be deciding your fate in a court of law. Yikes.

When I got the jury summons, admittedly I was a little peeved. While I understand the importance of serving, I don’t think anyone really ever wants to. Case in point, the deputy clerk asked for a show of hands of who was looking forward to serving; only 1 person raised their hand. My guess is they live alone and have no friends. I digress… So, I wasn’t looking forward to it, and I had to ask for my date to be moved because of an already-established work obligation, and when asked, “When is your first free date?” I should’ve lied. Coming off a 3.5-day party weekend to jury duty is brutal, but that’s just what happened. On that jury summons it indicated we should wear “proper attire.” That wasn’t happening, at least not for me (several other people dressed as if they were the ones being tried). In fact, I wore the same clothes from the day before, unshowered, and generally looking like a deviant; admittedly I was hoping to get removed from the selection pool. 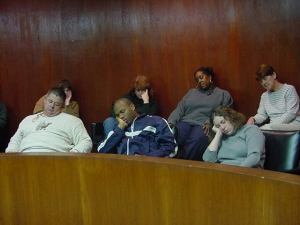 These people will decide on your freedom. Good luck.

After watching the video, we were left to our own devices – almost literally in every case (stupid “smart”phones permeate every aspect of our lives…) until about 11am when the deputy clerk read the roll. I assumed everyone’s name was going to be called to make sure that nobody had snuck out, which was tempting, but she only read 40/65 names, and mine was not one of them. I was thrilled – I was going home! Or so I thought… They weren’t letting the rest of us go yet… At 12:30pm they let us go for lunch for 90 minutes. I went home, walked the dog, ate lunch, and returned. The clerk had mentioned before we left that they were expecting another jury to be called at 2pm. I didn’t believe it, but it was out of my control. We were scheduled to be there until “no later than 5pm” regardless of whether or not we were called, so after lunch I brought a book. I was still tired from the weekend’s shenanigans, so I did more half-sleeping than anything, plus a little eavesdropping for good measure. It was actually pretty interesting to see how people accepted the situation; most just appeared to grin and bear it, as did I. The clerk did periodically call the roll to make sure no one had left (some had) or to see if any late stragglers came in (1 guy showed up about 90 minutes late; he better have not gotten “full credit”). Slowly, though, people from the first group of 40 started to trickle back in to the waiting room: they were not selected, weeded out of the pool for some reason. There was a group of 5-6 folks that grew to 8-9 as people came back in that were swapping stories about the current selection process or ones they had been involved in in the past. I overheard one guy said he’d served on three different juries, and some of the stories he told were kind of out there. For instance, he regaled about people specifically trying to be weird to not be called, and sometimes it worked, but also people who were legitimately weird and did get called, mostly as backups. Their little group began to resemble a group of friends sitting at a bar, and in some ways, it was strangely comforting: all as different as could be in age, race, socioeconomic background, etc., but they came together in communion over their shared station in life that afternoon. Maybe it gave me a glimpse in to what is possible in this world, but I think that would be reading into it too much. Cohesion around shared circumstances only lasts so long…

When I first arrived to the courthouse, about 45 of the selectees had already arrived, so I grabbed one of the few empty chairs with space on either side; I was hoping no one would sit next to me or talk to me the whole time. Yeah, it was like that. Well, there was one of the few attractive women sitting behind me, and while I had no plans or interests in “spitting game” on her, I did come to find that she bummed me out. She was clearly sick, hacking and coughing uncontrollably, so much so that some other guy came over and gave her some lozenges. I could sense her snot and spittle hurling through the short distance in the sky to my neck, and I was waiting my chance to sneak into a new seat out of her direct line of projectile snotting. I found a seat on the perimeter of the room which allowed me to survey the whole scene, and kept me close to the door for whenever I was given the opportunity to depart. She was sitting next to some guy who was intent on talking to her, virus be damned, and admittedly, they seemed to establish a steady flow of conversation. There were knitters, Netflix watchers, crossword puzzle-doers, you name it. Adjacent to the main waiting room was another smaller room that had carrels, a few “comfy” chairs, and a TV that I imagine only played episodes of the People’s Court and Judge Judy. I never went in that room, for one because it was already crowded, but it also had no natural light. Even though the luminescent lights above irradiated the room I was in, at least there were windows that let in some indirect, gray light from the outside world. People were sleeping throughout the place; one guy was snoring loudly. Many of us chuckled in shared commiseration of our situation. In many ways, most of what transpired that day was reminiscent of the horrors of an airport lobby and airplane: cattle cooped up, ready for the slaughter. It’s amazing the things we let happen to us in order to travel by plane (or train). Here we didn’t have an option, but nonetheless it was like being in some kind of low-security prison. At least I didn’t get shivved.

We got a “break” at 3:15pm for 15 minutes, and then just before 4pm the deputy clerk let us go. She informed us that we had all served our debt to society and would not be asked to serve for another two years. I started to think about how I could get out of this in the future, and I plan to get a license from out-of-state so that I can weasel out if called again. The experience was mind-numbing, and I sure as hell have zero desire to spend more than 1 day of my time on a jury, regardless of its importance to the legal system.

She informed us that we would all receive our $12 checks by mail in about a week. Many of rolled our eyes, some chuckled, but we all wondered how they came up with that sum. Members of Congress make roughly $175,000 a year, and they’re only in session for 162 days a year. I’m not going to bother to do the math because it will be disheartening, but I know it comes out to more than $12 a day. So, I don’t feel any remorse in my thought crimes about how to avoid serving in the future; not until they pay me what Congress makes.