The Soft Core of the Earth – Bar People

Before I ever entered a bar, I was a “bar person.” Growing up in a college town in the Midwest, bars were everywhere. There were those for the students and those for the townies, and on occasion those two groups mixed, but the point is that there was an abundance of them to appeal to the diverse drinkers’ desires. The heart of the Midwest, where’s it flat with no natural beauty – unless you consider corn and soy pretty – means that there isn’t much to do for fun besides drink. So, we get good at it there in flyover country. My older brother used to give me shirts from the local college bars, and I would proudly wear them to high school, even though I’d only set foot inside one of them once and was never anywhere near a drop of alcohol. In many ways, I was being raised to drink (not by my parents, mind you – quite the opposite with them), though it took a few for me to settle into the groove. As many kids do, there were scattered opportunities to drink in high school, and I took advantage of them, kind of. Mostly I pretended to imbibe or at least did so in moderation. In part, it was because I was scared I would get caught and in trouble (I was very good at getting caught at doing dumb stuff and getting in trouble), but I guess there was also some fear associated with it because I didn’t want to get sick, or worse.

I remember the first booze I procured on my own, eighth grade, I believe. We went to visit relatives in Arlington, Virginia, and I stole a couple cans of PBR and stuck them in my rollerblades with a 1.75L of Old Crow whiskey. That big ‘ole bottle I took to my friend Matt’s going-away party. He was moving to Kansas and his folks were out of town (they often left him and his brother unattended; mine never did), so six or eight of us went over there with the intent to get good and hammered, only I chickened out. I was always on a short leash, and if I recall correctly, I had to get special permission to even go because I was on parental probation at the time. Anyhow, it really wasn’t until my senior year of high school that I finally started to get sloshed. We drank a lot of 40 oz. bottles of malt liquor and Mad Dog (MD 20/20). Mostly we/I acted out of control when this happened, and between the summer of senior year of high school and freshman year of college, I got arrested or ticketed three times for underage drinking. The first was simply because a neighbor saw me bring in a 12-pack of Icehouse to a friend’s house (ticket), the second was for getting in a fight with a friend (that I started) at a park and my parents had to pick me up, and the third was for getting caught with an open container in a parking lot of a pizza place we always hung out at. I was the only one with alcohol. They took me downtown and then let me off with a ticket. The future was going to hold a lot of trouble for me, I could tell. But that was nothing new.

Once college started, I did continue to drink, but for the first couple of years I was more interested in pot and any other drugs I could get my hands on, so there wasn’t a lot of bar-going or unbridled drinking, at least for the first few years. Then once I got tired of not getting laid ever, I decided I needed to change things up and start going out to the bars (don’t worry, I still did drugs, too). Now, this is a slight tangent, but a relevant one. I never learned how to interact with girls. My dad and brother never passed on any insights, and most of my friends growing up were dorks and didn’t fare much better than I did in that category. Those who did surely didn’t share any secrets, and if I’m being honest, had they I probably wouldn’t have gotten much out of it. I was (am still?) a knucklehead that could and did screw everything up, so there’s that… Anyhow, my luck with the ladies did change once I started drinking and going out regularly, but I certainly never became a Don Juan. Mostly I just became your typical, run-of-the-mill college drunk, and I was quite fine with that. One of my proudest achievements of college was going out every night for the last eight weeks of my time as a student. Yeah, I didn’t have great priorities… So, when it came time to move on after college, I, and a couple college buddies, moved out West where we were faced with the realities of life-after-college (spoiler alert: nowhere near as fun as life during college), and we awkwardly tried to navigate our way through a new landscape. Mostly this involved going to bars and drinking and making zero contact with anyone else because we were timid losers. From then on for the next few years, I truly transitioned into a “bar person”: I went with great aspirations and left drunk and lighter in the wallet.

Another period of awkwardness – and drunkenness – transpired over the next few years, and slowly I found a social groove (though it was always lacking in comparison to my college days), and it was dotted with booze throughout. I hopped around from state to state, and booze was ever faithful, and bars were always aplenty. During this time, I also developed into a bit of a loner, but was always happy to socialize at the bars, and if/when possible, find a love interest, even if it was typically a fleeting one. In fact, something I’ve often remarked on to myself (and anyone else who would listen) is that how I “learned” to meet women was by being drunk at a bar. This is a problem for numerous reasons, at least one of which I’ll detail below.

Inevitably I got older and going out until the bars closed lost its appeal; drinking did not, at least not immediately. However, over time, I felt the need to drink less often, and at this point in my life if I drink more than two days a week it would be unusual, and I’m down from my peak of 8-10 drinks out to three, maybe four, max. I go to bed earlier because I like to, and I get up earlier because I don’t want to “waste” the day. In fact, I couldn’t tell you the last time I went to a bar where I wasn’t there on a date or there to see a band past 10 p.m. It has simply just lost its luster for me. Mostly, that is a good thing. But I now have no in-roads to meeting women because I never learned how to do it properly or without alcohol and dim bar lights. Now, all we do is try to meet our love interests through dating apps, something I loathe and refrain from doing if possible – typically until the camel needs water… 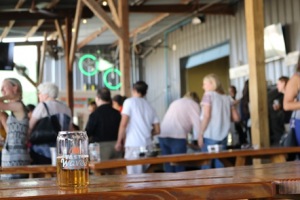 This was all expedited by the pandemic (the less drinking, less going out thing). I live by myself and have no dependents, and as I already mentioned, I’m a loner, so aside from being stripped of live music (which really sucked), the “stay at home” orders and closures of nightlife had little to no effect on me. I saved money and avoided awkwardness, headaches, and frustration, so it was likely a blessing. Now that things have opened back up, I can’t say that I’ve been particularly motivated to resume most normal activities, though I sure am glad to have live music back in my life – which brings me to why I’m writing this essay.

I decided in an effort to set aside money for some really awesome opportunities down the road I was going to scratch out some expenses from my live, specifically reducing the amount of travel I do and cutting back on the number of concerts I attend every year (usually 50-60 a year during the “before times”). All good. Well, there was this band I’d only seen once or twice before the pandemic that I really enjoyed, and they were playing in town over Thanksgiving weekend at a local watering hole that caters to never-gonna-make-it and under-the-radar bands. While the billing indicated music was from 9-11:30 p.m., I was skeptical it would start or finish that early, so I arrived about 9:30 p.m. to have that affirmed; the opener would go on at 10 p.m., the headliner, who I wanted to see, at 11 p.m. At the moment I learned this information I thought about cutting my losses and heading home. But I wanted to see them, and I hadn’t been out in a while and hadn’t really done anything especially social over the holiday weekend, so I stuck it out. The crowd was thin, and I found a seat at the bar. I had no interest in talking to anyone, not only because I was basically sober, but because I was feeling a little bit ornery at having to wait so long for the show. Also, I didn’t see any women worth approaching that would want anything to do with me, so I just turned into a wallflower.

The band I was there to see has a pretty ruckus following. They’re the overly tattooed, undereducated, surly, greasers and tradesman types (not that there is anything wrong with that), and in accompaniment were the regulars of the establishment, the people who know everyone and come-everyday types. Well, as I sat and moped, impatiently waiting for the rock n’ roll to start, I continued to observe those in my company; the kind of people I used to be, but no more. I don’t much care for people in general, and the bar people have come to especially annoy me. Not because they’re inherently bad or in any way worse than others, but when lubricated, people feel a special right or need to be social, including with those they don’t know. Pandemic aside, I wasn’t looking for this. And because of that, I found I wasn’t in the right place. I left my barstool days behind, and I’ve got no problem with that. These drunk saps can have my seat, it’s closing time for me.