Last month we found ourselves at the site of a mid-season NFL battle in upstate New York, and for the November edition of the Pléiades 1 – SPOT 6/7 Stadium of the Month we travel across the nation to one of two new National Football League (NFL) stadiums, SoFi Stadium, in southern California. 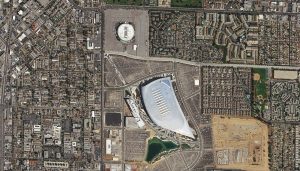 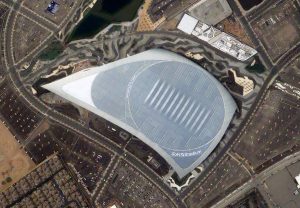 A 50-cm color image of SoFi Stadium in Inglewood, California, USA collected on September 13, 2020 (which was also the first game day in the new stadium!) by Pléiades 1A; and then a 1.5-m SPOT 6 image of the same stadium collected on September 5, 2020. These images have custom processing and color balancing applied by Apollo Mapping. PLEIADES © CNES 2020, Distribution Airbus DS. SPOT © Airbus DS 2020.

About the Stadium: Located in the western suburb town of Inglewood, California, SoFi Stadium is situated about equidistant from Los Angeles and the Pacific Ocean. The privately-financed $5.5-billion stadium is the most expensive in the world and will host two NFL teams, the Los Angeles Chargers and the Los Angeles Rams. Ground was broke for SoFi Stadium, which was designed by HKS, Inc., on November 17, 2016 and construction was completed by September 8, 2020 in time for its NFL home opener. The 70,000 seat stadium (which can expand to hold 100,000 fans for key events) sold its naming rights in 2019 to SoFi for a reported $400-million over 20 years. SoFi Stadium features a Texas-made artificial field, the Matrix® Turf with Helix, which is apparently a favorite with NFL teams from the Lone Star State.

Fun Factoids: (1) SoFi Stadium opened its doors for its first game on September 13, 2020 when the Rams beat the Dallas Cowboys 20 to 17. Perhaps most notable is that no fans were in attendance for this stadium opener given the deepening COVID crisis here in the USA. Being home to two NFL teams, SoFi Stadium will be a busy venue, hosting four homes in November alone. (2) The Chargers’ and Rams’ home stadium is part of the 300-acre Hollywood Park Racetrack redevelopment plan which features a hotel, 500,000 square feet of retail and 2,500 new homes. (3) The massive 3.1-million square foot SoFi Stadium will host a variety of events besides NFL home games, including the college football LA Bowl, WrestleMania and Taylor Swift over the next year. (4) SoFi Stadium is the first indoor-outdoor stadium in the NFL featuring a clear ETFE plastic roof with openings on the sides for fresh air.