Last month we checked out the historic site of an American Civil Rights battle in honor of the late great Congressman John Richard Lewis, and for the October edition of the Pléiades 1 – SPOT 6/7 Stadium of the Month we pivot back to our more traditional series on sports stadiums with a visit to an expected Week 6 National Football League (NFL) home game, Bills Stadium in Orchard Park, New York. 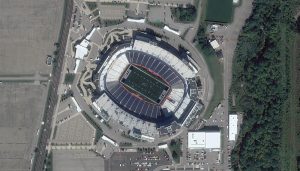 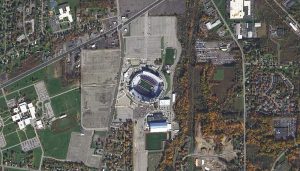 A 50-cm color image of Bill Stadium in Orchard Park, New York, USA collected on September 20, 2019 by Pléiades 1B; and then a 1.5-m SPOT 7 image of the same stadium collected on October 29, 2019. These images have custom processing and color balancing applied by Apollo Mapping. PLEIADES © CNES 2020, Distribution Airbus DS. SPOT © Airbus DS 2020.

About the Stadium: Located about 9 miles (14.6 kilometers) from downtown Buffalo in the southern suburb of Orchard Park, which is at the eastern edge of Lake Erie, Bills Stadium is home to the NFL team, the Buffalo Bills. Bills Stadium was set to open the season as New Era Field but it appears the COVID-related financial crisis led the team to terminate the seven-year contract early. The construction of Bill Stadium took a bit over a year, starting on April 4, 1972 and opening for the 1973 NFL season on August 17th. The 71,621-seat stadium was renovated in 2013 at the cost of $130 million where three new scoreboards were added and concessions were significantly expanded among a variety of other improvements.

Fun Factoids: (1) Bills Stadium will host an October 15th Thursday Night powerhouse matchup between last year’s Super Bowl champion, the Kansas City Chiefs, and the Buffalo Bills. Interestingly this is the same night the rescheduled 2020 NFL Draft will start. (2) The original stadium name, Rich Stadium, is one of the earliest examples of selling naming rights as Rich Products bought the rights in 1972 for $1.5-million over 25 years. (3) Bills Stadium has a long history of hosting major concerts with Lynyrd Skynyrd starting it off in 1974, and a COVID rescheduled performance from Def Leppard, Mötley Crüe and Poison will continue the tradition in 2021. (4) The stadium features an A-Turf Titan 50 artificial field that is made from recycled rubber and saves between a half million to a million gallons of water per year!