Last month, we checked out the site of a crucial early matchup in Germany’s football league play, and for the August edition of the Pléiades 1 – SPOT 6/7 Stadium of the Month we travel back to the United States to the site of a semi-professional basketball tournament, Nationwide Arena in Columbus, Ohio. 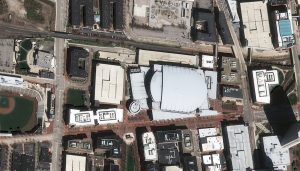 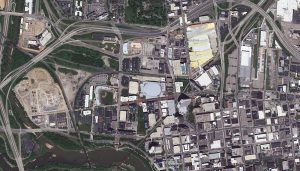 A 50-cm color image of Nationwide Arena in Columbus, Ohio, USA collected on April 6, 2020 by Pléiades 1B; and then a 1.5-m SPOT 7 image of the same stadium collected on June 7, 2020. These images have custom processing and color balancing applied by Apollo Mapping. PLEIADES © CNES 2020, Distribution Airbus DS. SPOT © Airbus DS 2020.

About the Venue: Located on the northern side of the centrally-positioned Arena District in Columbus, Nationwide Arena is just a short walk from the Scioto River. After a cost of approximately $150 million and a bit over two years of construction, Nationwide Arena opened in 2000 to sold-out back-to-back concerts by Tim McGraw and Faith Hill. Currently the home of the National Hockey League (NHL) team, the Columbus Blue Jackets, little had been done to the arena since its opening before an announced upgrade to its luxury suites and then a more recent announcement of improved internet. Depending on the event it’s hosting, Nationwide Arena can hold between 17,000 and 21,000 fans.

Fun Factoids: (1) First played in 2014, this year’s edition of The Basketball Tournament (TBT) will be played at Nationwide Arena from July 4th to the 14th. The winner take-all tournament features 24 teams playing in a single-elimination, bracketed format for a $1 million (some sources say $2 million) prize. Many of the teams are made up of former college basketball players, for example my favorite team, the House of ‘Paign, featuring a bunch of alumni from the University of Illinois – go Illlini!! (2) The 110,000 square foot OhioHealth Ice Haus is connected to the arena’s west side and was the NHL’s first attached practice facility. (3) It took some 1.3 million bricks and 12,000 gallons of paint to cover the walls of Nationwide Arena, and then 200,000 watts of power to get the audio/visual system pumping!