In May we took a peak at a stadium in one of the world’s few active sports league, and for this edition of the Pléiades 1 – SPOT 6/7 Stadium of the Month we travel to Europe and to the first football league that opened for play with a look at Red Bull Arena in Leipzig, Germany. 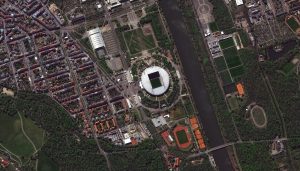 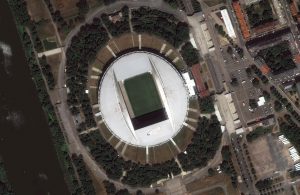 A 50-cm color image of Red Bull Arena in Leipzig, Germany collected on June 9, 2019 by Pléiades 1B; and then a 1.5-m SPOT 6 image of the same stadium collected on April 23, 2020. These images have custom processing and color balancing applied by Apollo Mapping. PLEIADES © CNES 2020, Distribution Airbus DS. SPOT © Airbus DS 2020.

About the Venue: Red Bull Arena is located to the west of downtown Leipzig, Germany along the shores of the human-created river that runs north-south through the town, the Elsterbecken. While Red Bull Arena can trace its roots back to 2004, sports have been played at this location since at least 1867 with a massive 100,000 seat stadium, the Zentralstadion, occupying the space since 1956 – which was built from rubble following the devastation of the city in World War II. In 1997, after Zentralstadion fell into disrepair over the years, the city of Leipzig funded the construction of a new 44,000-seat modern football (soccer for us Americans) stadium in the same location at the cost of 90 million Euros. In 2010, Red Bull purchased the naming rights to the stadium and formed the new Bundesliga football club, RB Leipzig, who joined the top division of the league in 2016. Through the years, Red Bull Arena has seen a variety of improvements with the latest round set to bring the seating capacity to 48,000 seats at the cost of 50 million Euros.

Fun Factoids: (1) On June 20th, Red Bull Arena hosted a match between the now second and third place Bundesliga teams, RB Leipzig and Borussia Dortmund. In their brief history of matches, Dortmund has a 3 – 2 – 2 (wins – loses – draws) record against the hometown team and as we will see likely until there is a vaccine for COVID-19, the June 20th matchup was played in front of empty stands. (2) Apparently the record attendance for a match at this location occurred in September 1956 when Oberliga foes, Rotation Leipzig and Lokomotive Leipzig, took the field in front of 100,000 fans. Oberliga is the fifth tier football league in Germany. (3) Apparently Red Bull Arena hosts more than just Bundesliga matches with shows by Coldplay in 2012 and 2017, Depeche Mode in 2013 and AC/DC in 2016, to name a few.