Our focus in December was a renovated college basketball arena, and for the first 2020 edition of the Pléiades 1 – SPOT 6/7 Stadium of the Month we travel to the other side of the world with a look at the site of the 2020 Australian Open, Melbourne Park in Melbourne, Victoria, Australia. 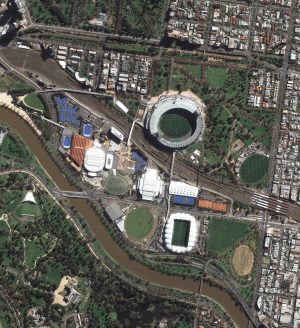 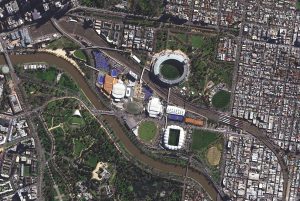 A 50-cm color image of Melbourne Park in Melbourne, Australia collected on September 18, 2019 by Pléiades 1B; and then a 1.5-m SPOT 7 image of the same stadium even collected on the same day!! These images have custom processing and color balancing applied by Apollo Mapping. PLEIADES © CNES 2020, Distribution Airbus DS. SPOT © Airbus DS 2020.

Fun Factoids: (1) The Australian Open is the first of tennis’ four Grand Slams, scheduled for late January each year. Melbourne has hosted the event since 1905 (other than two years it was hosted in New Zealand), and last year’s edition broke the attendance record with 796,435 fans! (2) A new retractable roof was installed at Margaret Court Arena in 2015, it claims to be the world’s fastest, opening and closing in just five minutes. (3) Melbourne Park has a rich tradition of hosting both sports and music events, including Alice Cooper, Elton John, KISS and Lenny Kravitz in the next six months.