The Pléiades 1 – SPOT 6/7 Stadium of the Month – Hallenstadion

During March we traveled to the site of a canceled EPL football match, and for this April’s Pléiades 1 – SPOT 6/7 Stadium of the Month the theme of coronavirus-impacted events continues with a look at a site of the now canceled IIHF Men’s Ice Hockey World Championship in Zurich, Switzerland, Hallenstadion. 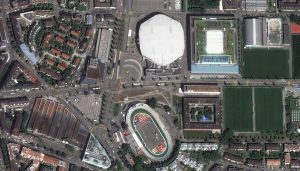 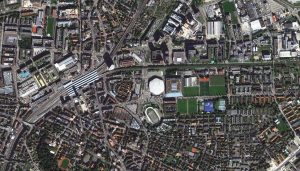 A 50-cm color image of Hallenstadion in Zurich, Switzerland collected on July 23, 2019 by Pléiades 1A; and then a 1.5-m SPOT 7 image of the same stadium collected on September 20, 2019. These images have custom processing and color balancing applied by Apollo Mapping. PLEIADES © CNES 2020, Distribution Airbus DS. SPOT © Airbus DS 2020.

About the Venue: Located about 4.5 kilometers (3 miles) north of Lake Zurich in the Oerlikon district of Zurich, Switzerland, the concept for Hallenstadion was inspired by a bike race canceled due to rain in 1932. A foundation headed by Heinrich Hirzel helped raised the funds for Europe’s then largest sports arena which broke ground on May 2, 1938 and opened for its first bike event on November 4, 1939. Eleven years later, on November 18, 1950, an ice rink opened in Hallenstadion bringing the total construction price to 3 million Swiss Francs (about $3.1 million). On May 29, 2004, Cher bookended the music concert series which started in 1959 with Louis Armstrong, after which the stadium was closed for major renovations, including the addition of a conference center and luxury seating. Hallenstadion reopened in July 2005 after some 145 million Swiss Francs (about $150.2 million) in upgrades.

Fun Factoids: (1) On March 21st, the International Ice Hockey Federation (IIHF) canceled the 16-team Men’s Ice Hockey World Championship that was scheduled for games in both Vaudoise Aréna (Lausanne) and Hallenstadion from May 8th to the 24th. The last world rankings had Canada, Russia and Finland respectively in the top three spots of men’s international ice hockey play. (2) Hallenstadion’s seating capacity ranges from 11,200 to 15,000 seats depending on the event it hosts – however the future of the arena is unclear as the ZSC Lions, Zurich’s professional ice hockey team, is set to move out at the end of 2021/2022 season for a new arena being built close by. (3) After 45 years and multiple albums, KROKUS played their last European show at Hallenstadion on December 12, 2019 – okay I admit that I have never heard of them J (4) When opened, Hallenstadion featured a wooden, 250-meter bicycle track that was reputed to be one of Europe’s fastest tracks!