Last month we were at the site of an early March Madness tangle, and for the April Pléiades 1 – SPOT 6/7 Stadium of the Month we travel across the pond to the site of a crucial English Premier League (EPL) football (soccer for our American readers) match, Etihad Stadium in Manchester, United Kingdom. 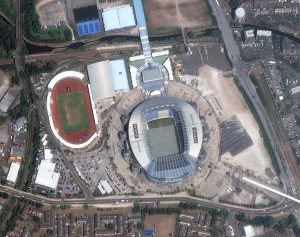 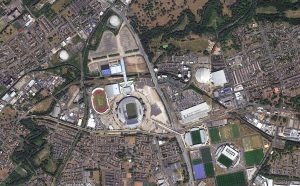 A 50-cm color image of Etihad Stadium in Manchester, United Kingdom collected on June 28, 2018 by Pléiades 1B; and then a 1.5-m SPOT 6 image of the same stadium collected on June 30, 2018. These images have custom processing and color balancing applied by Apollo Mapping. PLEIADES © CNES 2020, Distribution Airbus DS. SPOT © Airbus DS 2020.

About the Venue: Located about 3 kilometers (2 miles) northeast of downtown Manchester in the United Kingdom, plans for Etihad Stadium – originally called City of Manchester Stadium – came together before 1989 and the city’s failed bid for the 1996 Summer Olympics. After another failed attempt at the 2000 Summer Olympics, Manchester finally won its bid for the 2002 Commonwealth Games and so Etihad Stadium construction commenced. Construction on the stadium was started in January 2000 by ArupSport and completed in time for the ceremonial opening of the Commonwealth games on July 25, 2002 after a cost of approximately 112 million British Pounds ($146 million). Home of the Manchester City Football Club since 2003, Etihad Stadium features an artificial grass surface, GrassMaster, that was one time sprayed with garlic to reduce a parasite infection.

Fun Factoids: (1) Etihad Stadium will host a crucial EPL match on April 5th (which was canceled since this article was written due to the coronavirus pandemic) between Manchester City and Liverpool – currently the first (Liverpool) and second place teams in the league. During Premier League play, Liverpool dominates the matchup between these two clubs with a record of 79 – 43 – 41 (Wins – Loses – Draws). (2) In 2011, Etihad Airways bought the 10-year naming rights for the stadium for a record (at that time at least) 400 million Pounds ($520 million). (3) Originally opened to host track and field events for the Commonwealth Games, Etihad Stadium was transformed into a 50,000 seat football stadium over 9 months by closing the horseshoe-structure into an oval football stadium with the construction of new seats and even lowering the field by 6 meters (20 feet). (4) While the stadium is home to the town’s football club, it also hosts a wide range of sporting and music events, including Metallica and the Spice Girls in 2019, and then Beyoncé and Jay-Z and Taylor Swift in 2018.