Last month, we found ourselves at the site of a Florida-Florida State baseball game and in May we stick with the same theme with a look at the site of a Division 1 ball game in Lubbock, Texas, Dan Law Field at Rip Griffin Park on the campus of Texas Tech University. 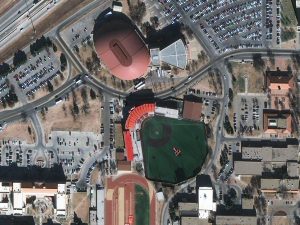 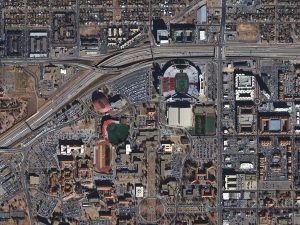 A 50-cm color image of Dan Law Fied at Rip Griffin Park in Lubbock, Texas, USA collected on December 12, 2017 by Pléiades 1A; and then a 1.5-m SPOT 7 image of the same stadium even collected on the same day! These images have custom processing and color balancing applied by Apollo Mapping. PLEIADES © CNES 2018, Distribution Airbus DS. SPOT © Airbus DS 2018.

Name & Its Origin: In 2011, the board of regents of Texas Tech approved a plan to change the name of the current baseball stadium, Dan Law Field, to Dan Law Field at Rip Griffin Park to honor one of their donors, Rip Griffin. From 1988 to 2011, the stadium was known simply as Dan Law Field to honor an influential football and baseball player for the university, Dan Law, who was also instrumental in fundraising for the park before it was built.

Location: Located on the northern edge of Texas Tech’s campus, Dan Law Field calls Lubbock, Texas home. Some 475 miles (764 kilometers) from the banks of the Gulf of Mexico, Lubbock is in the northern hill country of Texas putting this stadium at about 3,220 feet (981 meters) above sea level.

Stadium Capacity/Size, Architect & Build Date: While baseball was first played at Tech Texas starting in 1926, it is unclear what stadium they played in. Starting in 1988, the team definitely played its games at Dan Law Field as the yearly home records attest to here. The baseball stadium has undergone several major rounds of improvements, including one in 2002 and then a very well documented round in 2011-2012. The seating capacity at Dan Law Field is currently listed at 4,432.

Key Sports Teams: Like other baseball stadiums we have looked at, Dan Law Field is home to the men’s baseball team of the Texas Tech University Red Raiders.

Most Popular Yearly Event: Again there were few details on what goes on at Dan Law Field during the off-season but it does appear that they at a minimum use the stadium for concerts, for example Trent McClellan on May 15th.