In March, we checked out the site of the Big 12 men’s basketball championship, and for this month we move south with a look at Mike Martin Field at Dick Howser Stadium in Tallahassee, Florida, the site of a key NCAA Division 1 baseball game between the University of Florida and Florida State University.

Name & Its Origin: Mike Martin Field at Dick Howser Stadium is perhaps an unimaginative name that was created in two steps. First, in 1988, the stadium was named after former head coach, Dick Howser; and then in 2005, the field was dedicated to the current head coach, Mike Martin, who took the reins of the team in 1980! 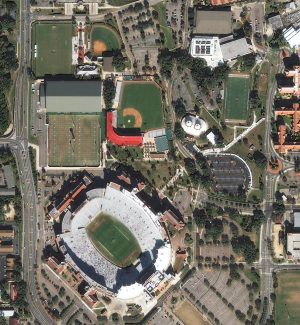 A 50-cm color image of Mike Martin Field at Dick Howser Stadium in Tallahassee, Florida, USA collected on November 26, 2017 by Pléiades 1A; and then a 1.5-m SPOT 7 image of the same stadium collected on the same day! These images have custom processing and color balancing applied by Apollo Mapping. PLEIADES © CNES 2018, Distribution Airbus DS. SPOT © Airbus DS 2018.

Location: Located centrally in Tallahassee, Dick Howser Stadium (shortened for convenience here on out) is some 26 miles (42 kilometers) north of the Gulf of Mexico. This stadium is only 65 feet (20 meters) or so above sea level meaning that in comparison to the thin air here in Colorado, this thick Florida air could help knock down a few fly balls.

Stadium Capacity/Size, Architect & Build Date: Dick Howser Stadium opened its doors for baseball on March 29, 1983 in a losing effort to Louisiana State University, 5 to 15. According to Wikipedia, the stadium original cost $14 million to construct. The stadium has been through multiple rounds of renovations, including a $12 million upgrade in 2004 and a soon-to-start $25 million upgrade. At 400-feet to centerfield, Dick Howser Stadium holds 6,700 fans, making it the 20th largest college baseball stadium in the USA.

Type of Field Surface: As an open air stadium in a location with a year-round growing season, Dick Howser stadium features a Bermuda grass field.

Most Popular Yearly Event: From our scouring of the web, it appears that Dick Howser Stadium is used exclusively for Seminoles’ baseball but we could be wrong – apologies if so! Since opening its doors in 1983, the stadium has seen more than 4 million fans pour through the turnstiles and is typically in the top 15 in college baseball home attendance.

Fun Factoids: (1) On April 10th, Florida and Florida State will tangle at Dick Howser Stadium featuring a matchup of two (currently) Top 25 ranked college baseball teams. This is not the matchup we normally think of when we hear about Florida-Florida State games, but hey, who’s counting?! (2) The Seminoles played baseball from 1948 to 1950 at Centennial Field which at that time was also home to their football team. (3) In 1983, the Seminoles averaged 1,919 fans at their homes games; however by 2017, the average attendance more than doubled to 4,224 per game.