During October we checked out the site of a hotly-contested mid-season National Football League matchup, and for this edition of the Pléiades 1 – SPOT 6/7 Stadium of the Month we travel across the pond to the UK with a look at the site of a key Premier League football match, Anfield, in the suburbs of Liverpool.

About the Stadium: The historic stadium, Anfield, is located in the northwest suburb of Liverpool with its same name; and is about 4 miles (6 kilometers) from both the Atlantic Ocean and the River Mersey, which divides the metro region into two halves. The stadium opened in 1884 and was the home field of Everton F.C. until 1892 when that club moved to Goodison Park. After the move, a new football (or soccer for our US readers) team was formed, Liverpool F.C., and it has called Anfield home ever since. Originally opened with some 8,000 seats, the stadium has seen many rounds of improvements, bringing the current capacity to just over 54,000 fans – which is the seventh largest stadium in England. There are plans in the work to expand Anfield once again to about 61,000 seats but those plans have been delayed by the ongoing global COVID crisis. In 2017, the pitch at Anfield was replaced with a 97% Dwarf Perennial Ryegrass natural field interwoven with some 25,000 miles (40,000 kilometers) of artificial turf fibers. 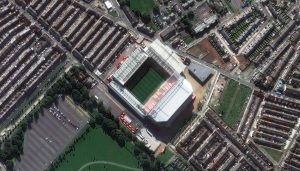 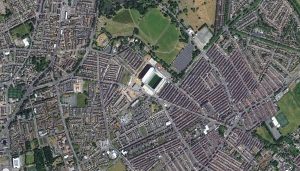 A 50-cm color image of Anfield in Anfield, United Kingdom collected on September 12, 2020 by Pléiades 1A; and then a 1.5-m SPOT 6 image of the same stadium collected on May 28, 2020. These images have custom processing and color balancing applied by Apollo Mapping. PLEIADES © CNES 2020, Distribution Airbus DS. SPOT © Airbus DS 2020.

Fun Factoids: (1) Anfield will host a December 16th match between Liverpool and the Tottenham Spurs, both in the top quarter of the current Premier League standings. But unlike the USA where many sporting events are allowing fans to return to the stands, all Premier League matches will be played in front of empty stands as the COVID crisis spikes around the globe during the Northern Hemisphere’s winter. We wonder if American sports team will be forced to follow suit if our own COVID case count continues to soar? (2) While Liverpool F.C. is one of the Premier League’s most popular teams, only 100 or so fans showed up for its first match. (3) Anfield’s grass-turf hybrid field features more than 20 million turf fibers and some 19 miles of underground piping to keep the field heated during the UK’s cold winters. (4) Anfield is used to host a variety of sporting events outside of football, including multiple rugby tournaments and even boxing matches during the 1930s. Most recently, music concerts returned to Anfield in 2019, with Bon Jovi headlining the summer series, though the COVID crisis has seen all 2020 and likely many 2021 concerts canceled.