The Pléiades 1 – Pléiades Neo Stadium of the Month – MCH Arena

In July we checked out a newer stadium in Florida used in Major League Soccer, and for this edition of the Pléiades 1 – Pléiades Neo Stadium of the Month we jump across the Atlantic Ocean with a look at a smaller stadium in a rural Danish town, i.e. MCH Arena. 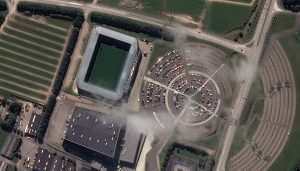 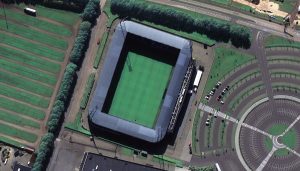 About the Stadium: MCH Arena is located on the south side of Herning, Denmark – a town of about 50,000 residents some 34 miles (54 kilometers) from the Atlantic Ocean. The vision for MCH Arena goes back to November 2000 when the CEO of Messecenter Herning A/S (known as MCH Group A/S now) submitted a plan to the city that included a new stadium – and shortly thereafter, a newly formed Danish football (soccer) club, FC Midtjylland, agreed to call it home when constructed. Ground broke on April 2, 2003 and the 11,535-seat stadium was completed by March 2004 for a cost of about $13 million. MCH Arena features a natural grass pitch which is a mixture of Smooth-stalked meadow-grass and Ryegrass 4turf.

Fun Factoids: (1) Herning is set to host the 2022 ECCO FEI World Championships from August 6th to the 14th. Theis event is the world championship for equestrian jumping, dressage and vaulting; and is expected to draw more than 200,00 visitors watching around 550 athletes from 70 plus countries compete. The championships for jumping and dressage will be held at MCH Arena. (2) Over the years, the stadium has had several names, most recently SAS Arena, but when Scandinavian Airlines’ naming sponsorship ended in 2010, the name was changed to MCH Arena – short for MesseCenterHerning who are the owners of the stadium still. (3) FC Midtjylland plays in the Danish Superliga which, according to this ranking, is one of Europe’s mid-tier professional leagues. At the time of drafting this article, FC Midtjylland stood in second place in the league, just three points behind FC Copenhagen. (4) According to this news story, the grass field at MCH Arena was destroyed in 2013, the last time it hosted a championship equestrian competition; so it seems likely that they will be installing a new pitch again in the next few years!