Last month we were ‘deep in the heart of Texas’ with a look at a new soccer stadium in the state’s ‘weirdest’ city, and for this July edition of the Pléiades 1 – Pléiades Neo Stadium of the Month we check out another newer Major League Soccer (MLS) stadium, this time in Fort Lauderdale, Florida, i.e. DRV PNK Stadium. 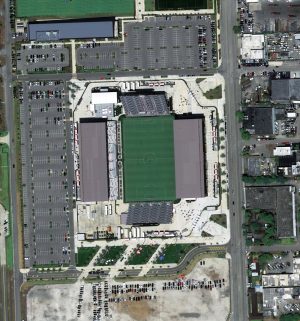 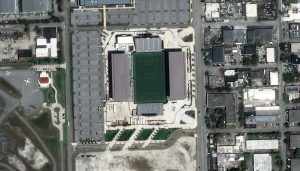 A 30-cm color image of DVR PNK Stadium in Fort Lauerdale, Florida, USA collected on April 24, 2022 by Pléiades Neo 3; and then a 50-cm Pléiades 1B image of the same stadium collected on March 27, 2022. These images have custom processing and color balancing applied by Apollo Mapping. PLÉIADES © CNES 2022.

About the Stadium: Located in a suburb of Miami about 28 miles (45 kilometers) north of the city, DRV PNK Stadium calls Fort Lauderdale, Florida home even though it is officially the current home stadium of the MLS team, Inter Miami CF. DRV PNK Stadium is built on the former site of Lockhart Stadium which was at one time home to a North American Soccer League team, falling into disrepair when the league dissolved in 2016. When Miami was granted its MLS expansion team in 2019, Inter Miami settled on the site as its future training ground once its own downtown stadium is built. The $60-million stadium opened on July 18, 2020 and will likely serve as Inter Miami’s home until 2025. In 2021, AutoNation bought naming rights to the stadium, calling it DRV PNK (i.e. drive pink) in support of the company’s breast cancer awareness efforts – but the amount of the deal has not been disclosed.

Fun Factoids: (1) DRV PNK Stadium will host an MLS matchup between Inter Miami and the Philadelphia Union on July 13th. At the time of drafting this article, Inter Miami sat near the bottom of the MLS standings while the Union were in third place. (2) DRV PNK Stadium features a Latitude 36 bermudagrass surface from Sod Solutions Pro which is touted to have shorter, finer blades for a quick rolling surface. (3) Apparently DRV PNK Stadium is not without its local controversy as residents of Fort Lauderdale are upset with Inter Miami ownership as a public park has still not been built around the newly constructed stadium.

The Apollo Mapping sales team can answer any questions you might have about Pléiades 1 and/or Pléiades Neo. We can be reached at (303) 993-3863 or [email protected].