Remote Senselessness – They Called for Snow

The radio broadcasted in the background: “We are entering an emergency preparedness situation. The region will get between 16-20” of snow in less than 24 hours. This warning should not be taken lightly. Make sure you have enough food and provisions to get you through 72 hours of citywide shutdown, and be prepared to lose power for just as long.” I smiled and laughed at their warnings. Having spent enough time in states that repeatedly get pounded with almost as much snow – and often welcome it – this was of no concern to me. But others, they were worried. We weren’t far removed from a couple of hurricane scares: the first was a false alarm that scared the city for no reason; the second we weren’t prepared for and it showed in the end. So, I was not being naïve, but I was standing my ground. Let the snow come and bury us. I’ll be just fine where I am. 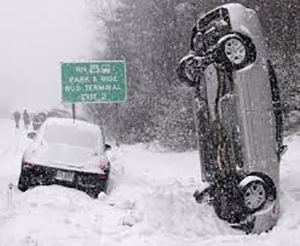 Maybe I’m a bad driver? Or at least a dumb one.

The newspapers showed empty shelves in stores; I wasn’t sure if this was Cold War Era Soviet Union or the present. Everyone jokes around here that the first thing to run out in the stores at the sight or sound of any storm is bread and milk. I don’t drink milk any longer, and I’ve got two loaves sitting on my counter as I type. Maybe I can engage in some price gouging – highest bidder wins. We’ve had major dumps here before, though not the 16-20” they were calling for. Twice we’ve gotten 8-10” which shut down much of the city. I still went out, though, happy to have the streets and parks to myself. I never understood why people were so frightened by snowstorms, but I’ve certainly witnessed their dark side. You never want to be stuck out driving in a blizzard – or a tornado for that matter. I’ve done both (more than I’d like to admit). Not intentionally, of course. I was going and the storms were coming. Epic battles ensued.

Once I was driving from St. Louis, MO to Boulder, CO in early April right in the thick of a tornado somewhere in Kansas. I was one of the few people foolish enough to be out on the roads, but I didn’t care at the time. I just wanted to go home. There were random sheets of ice on the interstate and every once in a while I would hit one and my SUV would shoot forward or sideways, depending on the angle of its pitch. The wind and rain were fierce – I needed my windshield wipers on full blast, but that wasn’t fast enough to keep my view from being obscured. It didn’t matter anyhow: the wind held such power that it prevented my wipers from even touching my windshield, yet still I drove on and somehow lived to tell about it.

Another time I was driving from Boulder, CO to Keystone, CO for a concert on a Saturday night in January. I was almost there when I hit some black ice and slid off the road, somehow narrowly missing about a half dozen cars coming towards me at 45-50 mph. My SUV (the same one from the tornado) looked like it would come to a stop against a big mound of snow pushed to the side of the highway – then it didn’t. I was travelling just a little too fast in my slide and it caused me to “trip” over the snowbank, rolling my SUV, coming to a halt with the wheels in the air (the insurance company pronounced my vehicle DOA). I was un-phased, but I guess it looked pretty harrowing. I let myself out of the truck and walked towards the road just as people called to me to see if anyone was still alive. I assumed I was. I still made it to the concert…

Another time I was driving from Boulder, CO to SLC, UT through a late April blizzard. I’d always seen those highway signs on the gates that will close down I-80 or I-70 in the worst of storms. I was certain they’d closed behind me on this trip. I was taking the WY route and the snow was falling at 2-3” an hour, or so it seemed. I was in the fast lane, maybe going 45 mph when on any other day I would have been doing 85 mph. All of a sudden the semi-truck in the slow lane merged over quickly and without notice – the interstate had narrowed to one lane because of the snow accumulation. To avoid being sideswiped by the semi I had to put on the brakes, spinning myself out into the median, wedged into a drift that quickly piled around me. Somehow I still had cell phone service and was able to get through to highway patrol who radioed a tow truck. I sat and waited for what seemed like forever, watching the traffic pass me by, slowly. Suddenly the traffic stopped passing, but I could no longer see out the window anyways. I assumed those gates were indeed shut. After a few hours of sitting in the ditch, my savior arrived: a massive tow truck that looked like it could pull a house off its foundation idled to the side of the road. Some scrappy young buck hopped out and came to my window, told me to sit tight and he’d get me out. He did. I was quite thankful. He then asked me to wait up at the next rest-stop to collect payment; he had to turn his attention to another vehicle: a semi-truck that had jackknifed behind me; the reason the traffic had stopped. I made it to SLC, eventually, in one piece.

Another time I was leaving the Midwest and headed back to TX in early January after one of the most frigid storms on record. Temperatures had highs in the negative single digits for days and lows of 30 below – the windchill added to those perilous conditions. But again, like always, I had to get where I was going when I’d planned to be there. Nothing was going to stop me, surely not common sense. From the central plains on through Western KY, there were sheets and chunks of ice causing white-knuckle driving. My whole body was tensed up and it was a relief once I could feel the rubber on the road. I can recall a few other harrowing road trips in less than inclement weather, but I think you get my point: storms of any kind can be quite troublesome for those on the road. But if you’re able to stay at home, what’s the big deal? Some of us aren’t smart enough though, I guess…

I turned on the TV to hear the news and they were talking about the storm: “This could be one of the worst snowstorms the area has seen in decades. Do not, under any circumstances, leave the house unless it is an absolute emergency. First responders may not be able to get to you in time due to snow accumulation and expected issues with communication systems brought on by the storms.” Nevertheless, I’ll probably venture out, if for no other reason than to frolic in the snow, hopefully while it is still pristine on one of the trails. It’s funny how what is supposed to be so menacing can be at the same time so serene and peaceful. They called for snow and I responded, “Let it come.”