Space technology is in its infancy, often a theoretical idea postulated long before the technology to make it a reality exists; it feels a lot like science fiction. Many of these ideas have indeed been used in science fiction. In the 1920’s, Russian engineer Konstantin Tsiolkovsky conceived of solar-powered stations in space to deal with the Earth’s energy crises. 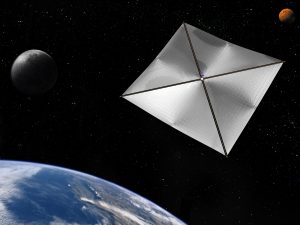 Today, the European Space Agency is grabbing hold of his concept with both hands and funding projects with this goal in mind. Solar power continues to gain traction across the globe along with other renewable energy sources like wind; however, both come with limitations: solar only works on mostly clear days and wind is a fickle element. They also face a problem of storage, and battery technology needs to keep innovating to keep up with advancements in renewable energy.

A solar station in orbit wouldn’t face some of these limitations. With a fixed position, always facing the Sun, it would never stop collecting solar rays nor would it contend with an atmosphere filtering out much needed energy. This all sounds like an incredible solution to one of our biggest problems, but it’s not an easy concept to usher into reality. To collect the amount of energy that’s required, the solar station would need to be around 10 square kilometers, which means it would be prohibitively heavy to get into space.

Concepts on how to make this work range considerably, but all of them are modular. One idea is to launch many small satellites that would attach to create the full station. Another group is working with 3D printed solar cells which would attach to solar sails. The beauty of this design lies in the ability to do most of the manufacturing in space, saving on resources and cost by avoiding launching many satellites. This is an issue people prefer to ignore and as such not enough research has gone into evaluating the environmental impacts of liquid rocket propellant ahead of the commercialization of space. Sticking our head in the sand because our eyes are full of stars is short-sided and does us no credit.

Solar sails are light weight and use solar radiation as propulsion. This system could be manufactured and deployed from the International Space Station (ISS) or the future Lunar Gateway station. Getting the energy back to Earth is another theoretical challenge that the Japan Aerospace Exploration Agency has wrestled with. Their design converts sunlight into electricity and then into microwaves for beaming down to Earth where it’s transformed back into energy.

This system would create a whole new avenue for renewable energy on Earth, and for that matter on the Moon and Mars. Fingers crossed more agencies look to the future, and the past, for solutions to the energy crisis and its considerable impact on climate change.