When will taking a flight in space be as common place as is hopping on a plane for a long weekend vacation? What looks like pipe dreams now will someday be the norm. Kids will grow up and have a hard time imagining a world without daily spaceflights. Private companies are muscling their way into this ever growing field. Exodus Space Corp has just unveiled its plans for commercial space flights. The startup has kept its plans close to the chest until now.

The AstroClipper is designed to carry cargo and crew into space, if it can pass safety requirements for a crewed spacecraft. It harkens back to the Space Shuttle with its plane-like takeoff and landing. It uses a booster to get out of Earth’s atmosphere that it sheds to create more junk to burn up in the atmosphere or liter the ocean. 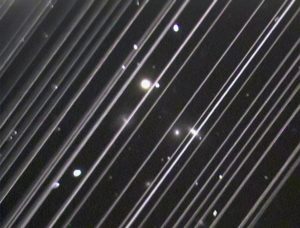 Exodus plans to show off the AstroClipper in 2022 in a technology demonstration that will keep it inside Earth’s atmosphere. Eventually, it will punch into space with the goal of carrying passengers and cargo by the 2030s. They’ve brought on industry leaders to join the team and will look for additional funding as they move through the phases of getting their spacecraft into space.

While we mull over the possibility of space flight as common place there is the question of how common light pollution will be in our future. More satellites are going up than ever before. SpaceX is launching 12,000 Starlink Internet satellites, each the size of a table. What no one anticipated is how bright the satellites would be. After their first launch of 60 satellites, in the early morning, a train of lights was visible overhead. It was so bright as to interfere with sensitive telescopes, like the Lowell Observatory in Arizona. They provide the disclaimer that they’ll be less obstructive as they reach their final altitude and spread apart, but this is the level of disturbance from 60 of the satellites, imagine 12,000 in orbit.

Starlink uses radio-based antennas, which could cause significant interference to radio telescopes, including the Vera Rubin Observatory set to map the universe in detail in 2022. Another controversy cropped up soon after launch when the European Space Agency (ESA) announced that their Aeolus satellite had to perform evasive maneuvers to avoid collision with a Starlink satellite.

It reeks of half-assed planning and little consideration for the astronomical community as a whole. In their grab for dominance in the new age of hyper-fast internet, SpaceX is willing to trample on whomever’s in their way. The US government seems willing to forego precautionary tests to avoid conflicts in the interest of making coin. While they spin their new constellation as “Internet for All,” its purpose is to provide banks with instant trade access and fund Elon Musk’s Mars colonization efforts.

How long until our night sky is shining back at us, trapping us inside a prison of our own making?