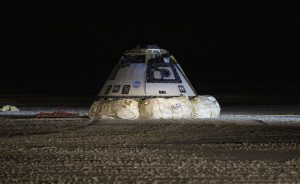 The Boeing Starliner that almost, but didn’t quite make it to the ISS. (Credit: NASA/Bill Ingalls)

It’s a new year with a new batch of space-faring satellites. This year we’ll see an exponential rise in internet satellites, with companies jockeying for dominance in this new era of internet everywhere. SpaceX plans to launch 1,400 Starlink internet satellites in 2020 with the goal of eventually sending up 42,000. They hope to corner the market on high-speed, low-latency internet using sun-synchronous satellites to speed up connections. To plug into their new network, you’ll need a $200 terminal the size of a pizza box to send and receive data.

OneWeb is following suit with around 650 internet satellites going into orbit. Current technology relies on data passing between computers, often involving numerous stops along the way, significantly slowing data transfer. With a network of satellites, data can transfer through a single satellite, speeding up the process. We can expect to see a significant proliferation of these satellites as more companies vie for customers, especially those in wealthy financial markets. It’s internet for everyone who can afford it.

2020 is a big year for Mars exploration. The United Arab Emirates is launching a Mars orbiter, the country’s first planetary science mission. The Hope probe will analyze the Martian atmosphere to track hydrogen and oxygen. China, the European Space Agency and the United States are all launching rovers to the red planet. Between them, they’ll search for past microbial life, drill for organic material six feet below the surface, and examine the planet’s atmosphere and geology. Maybe Martians aren’t the invaders after all. 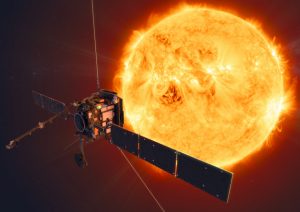 In the commercial sphere, Boeing plans to perform its first crewed mission to the International Space Station (ISS) with their commercial Starliner spacecraft. Though this could be delayed after Boeing’s last test failed to dock with the ISS but landed safely back on Earth. If you want to see a case study in how to turn a failure into a win, you can read the NASA press release.

SpaceX is facing similar delays with their crewed mission to the ISS, dubbed Demo-2. An escape system test failed in the summer of 2019, destroying the uncrewed Dragron spacecraft. They’ve since faced a number of delays, pushing back a full abort test and estimates on when the capsule will be ready to transport astronauts to the ISS. It looks like NASA’s goal to launch astronauts from the US instead of Russia using commercial spacecrafts is delayed yet again, ending the decade with their goal just out of reach.

The European Space Agency and NASA will be launching the Solar Orbiter in February. It will slingshot around Venus and Earth to get into orbit over the Sun’s polar regions, an area still in the dark to researchers. It will also orbit at the same speed as the Suns rotation, giving the satellite longer views of the same region. The Solar Orbiter will collect data on solar winds and magnetic fields. Polar views will grant researchers better insight into the dynamo processes that generate the Sun’s magnetic field. 2020 is gearing up to be a big year for space exploration. So sit back and enjoy the ride.