Out of This World – Water Bears!

Watch a movie featuring advanced technological concepts and you’ll notice it will fall into one of two camps: science saves the day or science creates an out-of-control monster. Movies without a tech-focus fall in the reality space, with science just cruising along at the pace of society. So you can see why, when new, far-fetched technological ideas blossom on the internet, people fall into one of the two extreme camps. We’re saved! Or all is lost! Some fun new Mars based theories have surfaced; let’s see where we end up camping out. 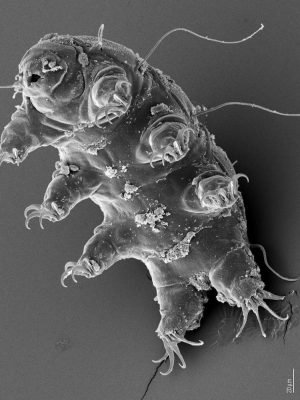 There’s an abundance of focus on Mars and what it will take to survive long-term habitation on the planet. Humans can survive a trip to Mars and back, a quick getaway to the red planet. However, years on the planet, exposed to radiation and less gravity, is detrimental to the human body. Researchers at the Lunar and Planetary Institute in Houston have proposed genetic engineering as a solution. More specifically, editing human DNA with an organism called tardigrades. And oh my gawd, this microscopic organism is friggin cute and carries the nickname “water bear.” Tardigrades belong to a group of organisms called extremophiles, united in their tough-as-nails characteristics. They live where wimpy humans only dare to dip their toes. We’re talking about highly alkaline or acidic pools of water, radioactive areas like nuclear reactor fuel rods, deep below glaciers, chillin on the edge of deep-sea hydrothermal vents. Some can only live without oxygen, making them anaerobes.

Tardigrades can withstand high levels of radiation, making them a candidate for genetically engineering our DNA with theirs to bolster our vulnerability. These grand ideas lack specifics, like how this genetic engineering would play out logistically. How do you even change the genetics of a full-grown adult? That’s a sizeable question mark, and the answer is over my head, not being a geneticist, but I don’t see an explanation for brighter minds to unravel either. For now, it’s a very interesting theory that would take decades of study and experimentation. There are ethical questions tied to this as well. Are we fundamentally changing our DNA? Will we no longer be Homo sapiens or will we turn into some other variation of evolution that’s skipped the arguably long process our species might inherit naturally? Who will get this new lease on life and how much will it cost?

If we fall back to our camps, is this a terrifying future or one filled with excitement and possibility? Would we name this new species Homo ignarus or Homo prudens?