Out of this World – Two Gas Giants Discovered by Citizen Scientists

We live in a side-gig culture, but who would have thought hunting for planets was a viable hobby? Two gas giants were recently discovered thanks to citizen scientists as part of a crowdsourcing project. The planets orbit a star 352 light-years from Earth, with a similar mass as the Sun but 1.5 times larger. Both planets are gas giants and orbit close to the star. The planet closest to the star, named HD 152843b is three and a half times larger than Earth and orbits the star every 12 days. Its pair, named 152843c, is over five time larger than Earth and has an orbital period between 19 and 35 days. The known planets orbiting the star demonstrate the unique differences between solar systems, and also how they form and evolve. 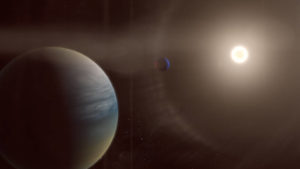 The Planet Hunters TESS project utilized data from the Transiting Exoplanet Survey Satellite (TESS) through the Zooniverse platform to find the gas giants. Citizen scientists dug through thousands of subjects to identify possible transits. A transit is anytime a planet passes between its host star and Earth, when light is blocked for a brief time as it crosses the line of sight. It’s easy to see how this could lead to many false positives. There are countless reasons why light may be blocked from a star somewhere along the line, so citizen scientists were looking for a measurable pattern. Planetary orbits are relatively fixed and a dip every 12 days is a good indicator that an object is orbiting a star at a fixed rate. With two planets, the transits may look irregular, but with enough data points, the pattern emerges.

After identifying the planets on Planet Hunter, the science team ruled out external anomalies like interference from the TESS instrument or other astrophysical events, such as two stars orbiting each other. It was then confirmed by astronomers using the Extreme Precision Spectrometer at Lowell Observatory in Arizona and the High Accuracy Radial Velocity Planet Searcher for the Northern hemisphere at the Telescopio Nazionale Galileo in Spain to measure the planets’ masses using radial velocity. While a star has a large mass, the gravitational pull of the planets causes the star to wobble or be pulled off center as it’s jostled around. This wobble was measured and the mass of the two planets identified, confirming their status as exoplanets.

Two gaseous planets orbiting a star 352 light-years away is an exciting find. Despite the perceived distance, it’s close enough for ground-based systems to study and astronomers to delve into their atmospheric and chemical compositions. Once the Webb Space Telescope is in orbit, we’ll see these planets in greater detail. You never know what you can find with a passion for science, but in this case it’s two (new to us) planets.