Out of this World – The Moment of Truth: James Webb Space Telescope

The time has finally arrived — after years of development, engineering, troubleshooting and problem solving plus collaboration between dozens of countries, organizations, and universities — as the James Webb Space Telescope is scheduled to launch on December 22, 2021 from French Guiana. The massive telescope is folded inside an Ariane 5 rocket. Once in space, it will unfold its 18 hexagonal pieces to assemble the primary mirror, 270 square feet (25 square meters) in area and 21 feet (6.5 meters) in diameter. 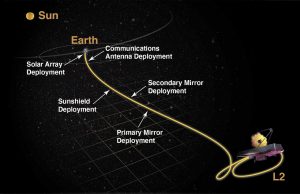 Zoom into the galactic core of the Milky Way Galaxy as seen by Hubble, and imagine how much further we’ll see into the heart of our galaxy with the Webb Telescope. (Image Credit: NASA and STScI)

A large telescope requires a comparatively large sunshield to protect the sensitive equipment that has to be folded and packed inside the rocket. Unfolding the sunshield and the mirrors is a delicate and complicated process that will take two weeks to complete. Then it will travel a million miles from home to the second Lagrange point. It will be beyond the reach of technicians in the case of an emergency, like the one Hubble encountered at the start of its mission and was corrected thanks to the Space Shuttle. The distance and position will allow the massive telescope to use less fuel and extend its life beyond the initial 5-year lifespan.

Achieving these incredible feats required technological advancements in every facet of the project. The result is a telescope that can look back in time, over 13.5 billion years ago. Webb will collect information from the near and mid-infrared portion of the electromagnetic spectrum, allowing researchers to see through cosmic dust to the objects beyond in ways Hubble never could. Not only will we see further back in time and see objects previously obstructed, the telescope will collect more detailed information on known objects in the universe.

Webb will make ultra-deep near-infrared surveys of the universe and image the earliest galaxies formed after the Big Bang. Scientists can investigate star formation and evolution, dark matter, and the atmosphere of exoplanets. Near-Earth objects will get a closer look and illuminate our own solar system in new ways. Watch the launch event live on YouTube or NASA TV. After a six-month commissioning period, the first, and much anticipated, images from the Webb Telescope will reach our screens and inundate us with never-before-seen images of our universe.