Out of This World – The Cost of Exploration

It’s impossible to look at the current state of affairs in the world and not be concerned. Even those with eternal optimism can’t ignore year-after-year of forest fires, record heat waves, power outages, rising sea levels, and ever-increasing extreme weather events. The launch of Jeff Bezos’ Blue Origin spacecraft with billionaires onboard amidst a global pandemic and growing economic disparities put these issues in stark contrast; and people have been asking the obvious question: if the US government can fund commercial spacecraft, why can’t that money go to saving the planet we’re standing on? 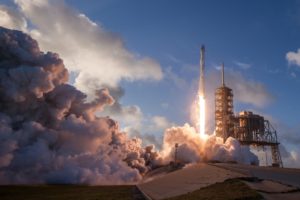 A SpaceX Falcon 9 launch (Credit: Photo by SpaceX on Unsplash)

More people are expressing their concerns from a variety of angles, including a look at how commercial companies are continuing to take a colonial attitude toward exploration and exploitation off-planet. This begs another question, once in space, who will regulate these corporations? What rules, safety guidelines and humane business practices will be enforced? Elon Musk has already proposed a form of indentured servitude, a one-way ticket to Mars in exchange for a job on the Martian planet. Only true Muskateers would see possible death, no return home, and a job without pay as a sweet, sweet deal. When we consider these endeavors are largely funded through billions in government contracts but follow the whim of their corporate masters, these become far more pertinent questions that need resolving before they are funded by public money. If this doesn’t look like the prequel to a dystopian nightmare, then what is?

There are also considerable concerns surrounding space tourism and the effect it will have on the environment. The particles from soot, the byproduct of hybrid engines, is so fine it’s difficult to measure and so light that they might stay in the stratosphere forever, effecting climate, rain fall and polar jet streams. Some researchers are quick to point out that aviation contributes far more to pollution than space flight, as if two wrongs make a right. However, space aviation pollutes higher layers of the atmosphere, the mesosphere and the stratosphere, places that don’t normally see as much pollution. At current levels, the measurable effect on the atmosphere is negligible simply because there are relatively few spaceflights, but how will that change as space tourism grows and, if companies get there way, there are over a dozen launches a day?

At the heart of the problem is the giant unknown of how space flight might affect the environment. There is zero incentive for commercial companies to research their impact on the environment. If anything, the incentive is to ignore the issue and keep shooting billionaires into space for immense profit while spending millions lobbying congress. Once again, the plan seems to be to deal with the issue after it becomes a problem as opposed to proactively mitigating negative side effects that are easy to predict.