Out of This World – Space Travel

Looking around at today’s aircraft technology can feel like we’ve reached a plateau of innovation. Planes have looked the same for decades and travel times are fixed. Aircraft destined for space have hitched rides on rockets since the Cold War. The future of space travel has taken the form of elevators, solar sails, and ion drives. Everything else seems to fall into the realm of science fiction, theoretical but far beyond our reach.

There is one form of propulsion that’s seeing new breakthroughs, and that’s hypersonic travel fueled by never-ending detonation. A detonation is a powerful explosion, like the blast that did immense damage to Beirut in Lebanon in August of 2020, killing at least 180 people. The energy released by that blast was enough to power over a hundred homes for a year. At that speed, a flight across the United States would only take half an hour and a spacecraft wouldn’t need a rocket to launch into space. Researchers want to harness that power and use it for air travel, but detonations are difficult to control and usually last for less than a microsecond.

Check out this news report demonstrating the hypersonic experiment and how it works.

A research group from the University of Central Florida created an experiment to test these factors and to see if detonations can be controlled. The experiment used an established theoretical propulsion system called an oblique detonation wave engine (ODWE), that creates a shockwave by funneling air and fuel at hypersonic speeds toward a ramp. The shockwave heats up the air and fuel, creating a detonation and propelling crafts forward at hypersonic speeds. Failure can occur when the detonation moves toward the spacecraft and its fuel source, causing catastrophic damage, or it’s too far away and the detonation is ineffective. This was the problem Kareem Ahmed, the lead author of the paper, and his team wanted to answer. 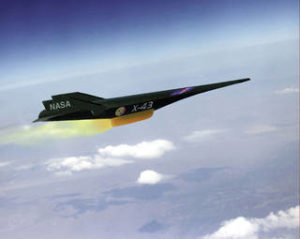 If a detonation is so brief, how can anyone be sure that it was controlled? To test their theory, they created a 2.5-foot-long series of chambers, acting as the spacecraft and its propulsion system, that mixed heated air and hydrogen gas then accelerated it at hypersonic speeds at a ramp. They were able to hold the detonation for three seconds, long enough to prove that it was controlled. This seemingly small experiment is a major step to making hypersonic travel a reality. It’s a proof of concept and Ahmed plans to run the experiment for longer durations. The initial test had to be short or they risked eroding the glass panels on the side of the test chamber that were necessary in the first experiment to see where the detonation was taking place. By switching out the glass for metal, they should be able to run more robust experiments for longer periods.

There are many more engineering questions to answer and a slew of obstacles to overcome, but the future of air and space travel could be hypersonic.