Out of This World – Psyche, the Metallic Asteroid Hunter, Announces Launch Delay 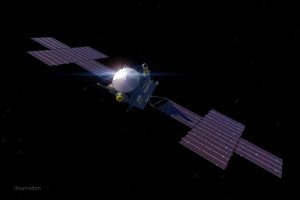 NASA was set to launch a giant probe the size of a tennis court to the Asteroid Belt by the end of 2022, but in late June NASA announced they would not make the Oct. 11 launch deadline. If launched in 2022, the Psyche asteroid mission, run by Principal Investigator Lindy Elkins-Tanton of Arizona State University (ASU), would have arrived at the Asteroid Belt between Mars and Jupiter by 2026. Delivery delays with the software and testing equipment set the team back and pushed them past the launch window. Despite the team’s desire to push forward, rushing wasn’t an option when they ran out of time to thoroughly test the system.

The Psyche probe builds on previous missions to nearby asteroids and expands its reach further into space, where energy from the Sun is much weaker. To power Psyche, 800 square feet (75 square meters) of solar arrays will unfold and point at the Sun. It’s the largest solar array ever assembled by NASA and will provide the science instrument with power — no easy feat so far from the Sun. NASA even took a page from commercial satellite technology to image in the intense cold of space.

Psyche is intended for an asteroid of the same name that’s believed to be made of heavy metals. To map the surface of Psyche, they gathered data from ground telescopes and found metal, sand and rock. They also mapped a large depression with a different texture on the interior compared the rim, leading researchers to believe it’s a sand filled crater. Researchers theorize Psyche is comprised of iron and nickel, the same as Earth’s core. Asteroids comprised of metals are relatively uncommon compared to rocky or icy asteroids. 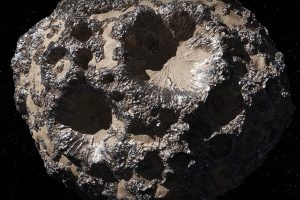 The map of Psyche depicts an asteroid with a varied composition. (Credit: NASA)

One theory is Psyche formed early in our solar system as a celestial body that might have been a building block to a planetary core similar to Earth’s. It could also be an object originating from outside our solar system and ended up part of an asteroid. Either way, unlocking clues to our celestial past is possible with the Psyche mission. However, due to the delay, NASA is creating an assessment team to map the path forward. There are viable launch windows within the next two years, but due to relative orbital positions the probe will arrive three years later. In the meantime, we’ll have to hope the James Webb Telescope can give us some insight once it’s up and running.