Out of this World – Mars Rover, Mars Rover We’ll be Right Over

On February 18, 2021, NASA rover Perseverance touched down on Mars after an eight-month journey and stressful landing conditions. After the thrill of contact and safe landing, the real work begins, and Perseverance is up to the task. 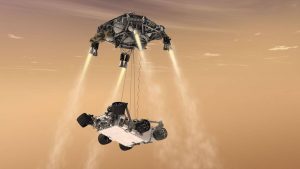 Perseverance being extra as it’s lowered to the Martian surface. (Credit: NASA)

Mars landings are treacherous and tricky endeavors and this one was no different, but the researchers took a new approach to give the rover a soft landing in dangerous terrain. They targeted the Jezero crater, believed to be an ancient river basin where water once flowed, in hopes of answering the ago old question: was there life on Mars? It’s an ideal target, but not an ideal landing site because accurate targeting is extremely difficult and landing sites usually have a wide margin for error and even then, 50% have failed. The crater’s steep cliffs, boulder fields and sand dunes presented researchers with a new problem to solve. Due to the incredible distance between the Earth and Mars, no one can remotely pilot the rover to a safe landing spot. Up until now it’s been the luck of the draw when it comes to landing rovers.

To reduce the uncertainty of a successful mission, Perseverance has new tools for on-the-fly mapping as it descended. Using Terrain-Relative Navigation (TRN), the onboard cameras took photos of the terrain and compared them to maps of the crater to orient itself and navigate to a safe landing site. The system underwent a barrage of testing and calibration on Earth where it was put through its paces and endless simulations. Recreating the environment on Mars is not an easy task with gravity at 38% that of Earth’s and a multitude of weather unknowns. They tested the system to account for sunny and dark conditions, high winds and dust storms. Field tests using a rocket laid their fears to rest before Perseverance was deemed space ready. 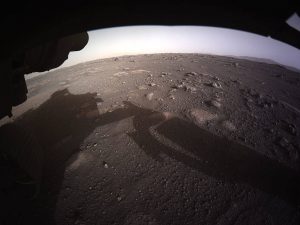 The first high-resolution image of Mars from the Perseverance’s Hazard Cameras (Hazcams) on the underside of the rover. (Credit: NASA)

To keep the payload safe from a hard landing, NASA used a system of rockets much like a jetpack to slow the rover’s descent. After the parachutes were deployed, slowing the payload down, the jetpack detached from the rover and used retrorockets to slow the descent further, then lowered Perseverance to Mars on nylon tethers. No small feat with a one-ton rover. Once on the ground, the tether released and the rover was free to move around the surface.

First, Perseverance sent a photo back to Earth, confirming the successful landing. Over the next few months, researchers will check all the component parts, testing the mast housing the rover’s top side cameras, before testing the first mini helicopter on Mars. Years of research into Mars geology and history are still to come thanks to the ingenuity of engineers and researchers, and their tireless dedication to technological advancement and space exploration.

2 responses to “Out of this World – Mars Rover, Mars Rover We’ll be Right Over”