In this monthly feature, we span the globe to examine Our Changing Landscape with a time series of medium resolution RapidEye satellite imagery. The RapidEye archive dates back to late 2008 and already contains more than 14 billion square kilometers of data. In the over-the-top patriotic July edition of Our Changing Landscape we checked out suburban growth in southern Washington D.C., and for this mid-summer edition we change pace a bit with a trip to Calbuco Volcano in Chile, the site of an April 2015 eruption. 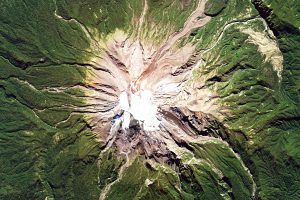 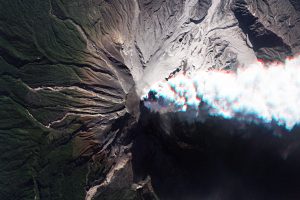 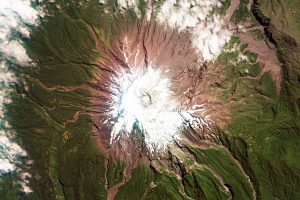 If you are a regular reader of this piece you will know that we are very particular about a standardized format for the image animation we present here. However, an unexpected ordering error, and lack of time to correct it, means we had to make lemonade out of lemons, but we think you will still enjoy it! This month we feature three still 5-meter RapidEye images of Calbuco collected on March 15, 2013, April 24, 2015 and January 13, 2019. The 2015 image is just plain cool and yes it is a bit dark but we did that on purpose so you could see the structure of the plume as it rises above the volcano. The 2013 and 2019 images show you the before and after of Calbuco – check out the caldera to see some definite changes in its shape following the large 2015 eruption. (Images Courtesy: © Planet 2019)

RapidEye is a constellation of five 5-meter (m) medium resolution satellites each offering five spectral bands of information. The RapidEye constellation offers daily revisits to every location on the planet with a huge footprint that is 77-km wide. The data is priced competitively with a starting cost of $1.28 per square kilometer for all five spectral bands – academics do receive discounts. RapidEye adds a fifth band, the red edge, to the ‘traditional’ multispectral set of blue, green, red and near-infrared (NIR). The additional spectral data in the red edge band allows users to extract more useful land ‘information’ than can be from traditional 4-band imagery sources. When RapidEye imagery is ordered as a Level 3A Orthorectified product, images from multiple dates are extremely well registered, making it the ideal data source for Our Changing Landscape.

Calbuco Volcano is located in southern Chile some 560 miles (900 kilometers) south-west of the capital, Santiago. The volcano is surrounded by water, with Lake Llanquihue to the north and then Reloncaví Sound, which opens to the Atlantic Ocean, to the south. Calbuco rises to 6,476 feet (1,974 meters) with an iconic eruption crater that is 1300 to 1600 feet (400 to 500 meters) wide. Calbuco is not as active as some of its close-by volcanic neighbors, but it does have a history of eruptions including major events in 1929 and 1961. While the slopes of Calbuco are largely treeless, the surrounding ecosystem is vibrant, supporting a plethora of recreational activities, which many locals depend on for income.

Following a 42 year dormancy, Calbuco erupted to life from April 22 to May 26, 2015. On April 22nd, the eruption shot an ash cloud at least 50,000 feet (15 kilometers) into the air which was visible from the close by town of Puerto Montt. Periodic eruptions followed and by April 28th, it was estimated that some 300,000 to 400,000 tons of sulfur dioxide had been released. Miraculously, it appears no deaths were attributed to the eruption, although 5,000 to 6,000 locals were evacuated and the flora on the slopes was scarred as these photos show. Finally, it is unclear if the 2015 eruption will have an impact on global climate change. With our short introduction of Calbuco Volcano concluded, it is time to turn to the 5-meter RapidEye archive to see how the 2015 eruption impacted the local geography!

If you would like to find out more about using RapidEye for your academic studies, engineering projects or any landscape analysis, let us know at sales@apollomapping.com or (303) 993-3863.