With our world changing every day and sadly not always for the best, it’s no surprise that we’ve found ourselves covering pollution as a topic several times here in our Mapping for Good series. Air pollution, oceanic and stream pollution, trash… you name it and there’s probably an organization doing their best to map the issue. Air pollution in particular can be a tricky one; after all, with air being a mixture of gases it’s much more difficult to map its ever-changing state over a localized area than say litter or the water quality of a given stream. How then can one go about collecting and compiling more accurate air quality data to allow policy makers and stakeholders to make more informed decisions? A collaborative partnership between the Environmental Defense Fund (EDF) and Google’s Google Earth Outreach is seeking to do just that. 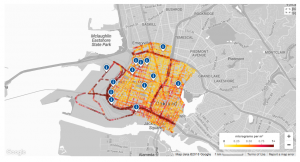 A map of black carbon particle levels in the air over Oakland, California from data collected by Google Street View cars and the EDF.

The question they sought to answer from the start was simple: “Air pollution is dangerous to our health, but we can’t see it and it’s hard to measure. So how do we protect people from it?”

The two organizations convened and matched each other’s specialties in one cohesive effort, The Environmental Defense Fund bringing to the table decades of experience in monitoring the environment and working with policy makers, and the Google Earth and Maps team with its cartographic expertise and most importantly, the on-the-ground Google Street View car fleet. The idea’s unprecedented leap ahead of conventional measurement techniques is summarized on the project’s site:

“Conventionally, stationary air quality monitors provide most of the information we have about air quality in U.S. cities. This new mobile methodology allows us to collect much more data, and to collect it at street level, where people are actually breathing the air. While this data is not meant to be used to show compliance with air quality standards, it helps us better understand where people are at the greatest risk from unhealthy air.”

The equipped Google Street Cars were deployed to areas where there are three stationary, regulatory-grade air quality monitors.

The initiative is only a segment of a growing effort on the part of the Environmental Defense Fund to advance its monitoring programs. Implemented in Oakland, the Google and EDF team found additional support from the University of Texas, working closely with Aclima to measure and analyze pollution data collected by Google Street View cars. Additional support was found in collaboration with community leaders at the West Oakland Environmental Indicators Project (WOEIP), “a community-based organization with deep experience in local air pollution issues, to identify potential causes of poor air quality. [They] highlighted traffic on the freeway, heavy-duty trucks moving through the community, and industrial activities as major sources of pollution that can impact people nearby.”

The totality of the project’s results and findings are still in analysis but further information of the data recorded as well as maps compiled with such information can be found here .­­