Modern civilization (and ancient civilizations for that matter) depends heavily on mapping and often in ways that we don’t even recognize on the surface. Location data is behind almost every device and automated technologies rely on maps for everything from subway systems to pizza delivery. The world, in fact, “runs” on maps. With such a deep integration of digital mapping in our society and global systems, it can be easy to forget that just 25 years ago (and frankly more recently) we all relied on paper maps. To dismiss them would be to dismiss the empires and nations that were built upon them, or at the very least the many millions of us who relied on them to get around, find new restaurants and even just “sightsee” (do people even use that term anymore?). Thankfully, the United States Geological Survey (USGS) has not forgotten, and as the government agency tasked with making the nation’s maps for several centuries, they’ve amassed quite the archive! 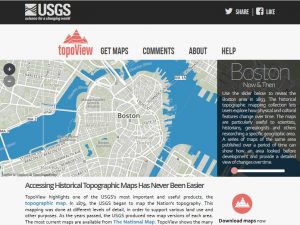 A screengrab of the welcome page to TopoView, a USGS web service that let’s users search for old topographic maps across the US and load them on their screen.

While I’m always excited to write these articles, I must confess that my inner map nerd lit up when stumbled across TopoView. The USGS-run website has scanned over 178,000 historical topographic maps of the United States and georeferenced them over the extent of the entire country. Though the USGS was founded in 1879, its topographical program has been in existence since 1884 and thus the maps in TopoView over many locations will go back that far. For the heck of it, I did my own test run of the system and searched over my hometown of Laguna Beach, California. Laguna is relatively new for American standards (though Europeans passed through it as early as the late 1500’s in Spanish colonial expeditions) having only been formally incorporated in 1927 so my expectations were quite low in regards to finding anything old. To my surprise TopoView instantly loaded an 1896 topographic map showing Laguna Beach (just labeled “Laguna”) with four structures clearly demarcated over what has since become downtown! That map, along with the many others that were created in later decades, retained strikingly accurate detail and gave me a newfound appreciation for the level of precision that our hand-drawing cartographic predecessors brought to the field.

TopoView’s value reaches beyond its initial novelty as a fun way to look at old maps. Ultimately, tools like TopoView can remind us of what really goes into a map, what a map seeks to accomplish for its viewers, and what we in turn can gain from them. In an age when answers aren’t just available but are expected, I feel it’s safe to say that a brief tangent into the maps of the past can be a healthy reminder of the skill and care taken to accurately represent the world in order to inform some of our most important decisions, whether in 1898 or 2018.

To learn more about TopoView go to https://ngmdb.usgs.gov/topoview/.