Our series Mapping for Good has been going on for two years now! For most of that time we’ve covered projects that use maps for “good” in accordance with our column title, looking at everything from the destruction caused by war to ancient ruins in Egypt and where to find fruit trees to pick from in your neighborhood. Today however, instead of looking at folks doing good with maps, we’re highlighting someone doing good for maps!

Cynthia Brewer is a rock-star in the cartography world – after all, it’s not often that cartographers make the news period, yet alone have entire articles written about them in Wired Magazine. Indeed, she may well be the most famous living cartographer in America. As chair of the Department of Geography at Penn State, she’s “devoted much of her career to helping other people make better maps”. We are familiar with her mission over here at Apollo Mapping as we regularly use what is perhaps the most well-known contribution to the mapping world, ColorBrewer. ColorBrewer is a cartographic tool that helps users figure out how to best display their data in the form of a map: 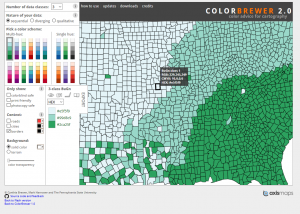 A screenshot of ColorBrewer in action in a scenario with sequential data, three data classes and a multi-hue scheme.

“The site has a simple, intuitive interface that forces you to think first and foremost about what kind of data you are trying to map. Do the values go from low to high, as with population density or temperature? Color Brewer will steer you towards a color scheme that progresses from light to dark. It will not allow you to make the rookie mistake of picking a rainbow palette.” – Wired

“If, on the other hand, what’s interesting about your data are the deviations from the mean—as in areas where unemployment is above and below average—Color Brewer will steer you toward a diverging color scheme, with reds at one end, say, and blues at the other. If you’re mapping different categories, such as different religions or ethnicities, Color Brewer will suggest a mix of up to 12 colors that are easy to distinguish. Fewer is usually better. After about seven, Brewer says, it gets really hard to tell them all apart.” – Wired

Why is all this color talk so important, and why am I so excited about colors on a map? With mapping, the ultimate goal is to distill spatial information down to a level that is comprehensible to the human eye. Simply put, maps exist to take what we know about the world in the form of data and make it digestible for the brain. By making seemingly minute changes to factors such as color or arrangement, tools like ColorBrewer make the task of displaying data effectively that much easier.

To learn more about ColorBrewer, well, just try it! 🙂