Free For All – The Climate Impact Map, a Dynamic Climate Change Visualizer

In this September edition of our Free for All series, we change the pace by covering a great example of an interactive and informative online map of climate change—the Climate Impact Map created by the Climate Impact Lab. The Climate Impact Lab is a collaborative entity consisting of climate scientists, economists, researchers, analysts and more from various research institutions. They hope to address the growing scourge of climate change by studying and modeling its impacts at different geographic scales. Using a data-driven and evidence-based approach, they aim to analyze both past and future climate trends in order to understand their global socioeconomic impacts and the complex relationship between climate and society. Information gathered will be accessible via an open, web-based platform, allowing for impact models to change dynamically as more research is added in. 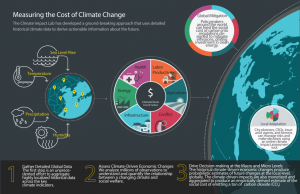 In addition to cataloguing important research, the Climate Impact Lab created an interactive map allowing users to model future changes in temperature based on RCP (Representative Concentration Pathways – or greenhouse gas concentration trajectories) values and varying probabilities of these occurring. On the website, users can input average summer and winter temperatures, average annual temperatures, as well as the number of days below freezing or above 95 degrees Fahrenheit. Time frames for the maps range from 1981-2010, 2020-2039, 2040-2059 and 2080-2099, with spatial coverage of either the United States or the entire globe. Values can be displayed in absolute Fahrenheit/Celsius temperature (actual temperature) or as the amount of change from the historical values. For those of you interested in the methods and metadata behind the map, here is a link to the methodology and then a link to download the underlying data.

The Climate Impact Lab hopes to influence decision-makers in all sectors to better understand and therefore mitigate the risks of global climate change. Their research will also culminate in the world’s first evidence-based estimate that quantifies the cost to society of each ton of carbon dioxide emitted; which in turn could encourage smarter investments in and legislation focused on climate and renewable energy. You can find out more about their approach here.