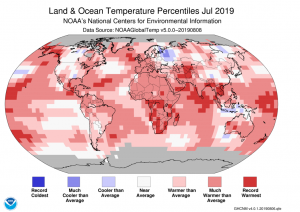 The July 2019 Temperature Departure map is a sea of red with record high temperatures on all continents other than South America. There were small pockets of cool weather in North America and Asia otherwise it was a sweltering month across the globe.