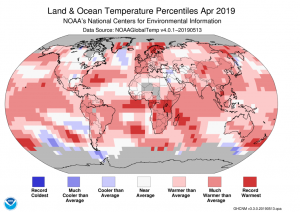 The April 2019 NOAA temperature departure map shows pockets of record warmth over Africa, Asia and Europe with some small pockets of cooler than average over Asia, the Middle East and North America.