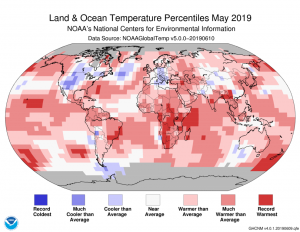 The May 2019 NOAA temperature departure map shows pocket of record warmth along Brazil’s coastline and in southern Africa; while the middle of North America and much of western Europe saw cooler spring temperatures.