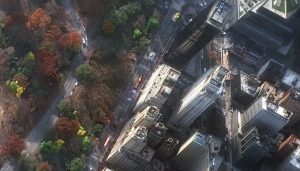 Happy holidays from New York City! Each year, the holiday season is welcomed in with the Macy’s Thanksgiving Day Parade. The Parade is present by Macy’s, a U.S. based department store chain. The Parade first took place in 1924, tying it with the America’s Thanksgiving Parade in Detroit for the second oldest Thanksgiving parade in the United States. The three-hour parade is held in Manhattan on Thanksgiving Day. In 1928, the quintessential balloons were introduced to replace the live zoo animals that had previously been used. That year the balloons were released instead of captured, and attendees were encouraged to find the balloons after they deflated in the atmosphere and returned to earth. Anyone who found the deflated balloons could return them for a reward of $100 (equivalent to more than $1,600 with inflation as of 2021). Each year, new balloons are added to the lineup. Kids and adults alike look forward to seeing some of their favorites – Bugs Bunny, Superman, Snoopy, Minnie Mouse, Hello Kitty and the Pillsbury Dough Boy – drifting through the Parade. These WorldView-3 images of the Macy’s Thanksgiving Day Parade, showing some of the famous balloons, were collected on November 25, 2021 at 11:44 AM EDT. This 30-cm WorldView-3 imagery has been processed by Apollo Mapping for improved perspective, clarity, and colors. And, finally, a quick note about the quality of these images, as well they are not the best! This degraded image quality is the result of two factors: first, the Sun’s elevation is low in the Fall so satellite images will tend to look dark when collected at this time of the year; and second, since Manhattan is home to some of America’s tallest buildings, they cast deep shadows on the streets below making it even harder to see into these areas, particularly when the Sun is low in the sky. (Satellite Imagery © 2022 Maxar Technologies)

Every time we look at WorldView-3 and WorldView-4 (WV3/4) imagery, we are blown away. And we hope you are equally impressed with the data! In November, we looked at Lake Pehoé, Chile, and for this edition of the 30-cm Color WorldView-3/4 Image of the Month we’re headed back to the States with a look at the Macy’s Thanksgiving Day Parade in New York City, New York.

If you are interested in WorldView-3 and/or WorldView-4 imagery for your next project, please let us know by phone, 303-993-3863, or by email, sales@apollomapping.com.