Out of This World – Black Hole Friday

Black Friday has come and gone. Some of us took advantage of a few online deals while other hardcore shoppers stood in line for the discounts. NASA, however, celebrated its fifth annual Black Hole Friday, using the hashtag #blackholefriday. Here, NASA posted incredible artist drawings and images of black holes and some of the unexplained phenomenon caused by these mysterious entities.

NASA’s social media accounts dedicated the entire day to educating us on what they know about black holes with content for both kids and adults. They broke down the different types of black holes that are characterized by their size and mass. 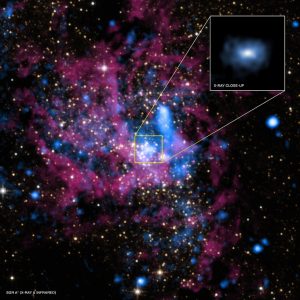 Take a moment to appreciate the black hole at the center of our galaxy, Sagittarius A. (Credits: NASA/UMass/D.Wang et al., IR: NASA/STScI)

The black hole closest to our hearts and physical distance is a super massive black hole called Sagittarius A. With a mass of over 4 million suns, it sits at the center of the Milky Way galaxy. Super massive black holes are the largest known black holes. Scientist believe they are formed at the same time as the galaxy they inhabit. NASA’s Hubble Space Telescope discovered that Sagittarius A last consumed a large amount of incoming gas about 6 million years ago. As it was pulled into the black hole it sprayed out hot gas, forming what is known as the Fermi Bubbles.

The Chandra X-ray Observatory recently detected similar sprays in two nearby galaxies that are slowly colliding. The instrument picked up X-ray emissions near the center of the smaller galaxy, spraying out in two arcs. These X-ray plumes swept up nearby hydrogen gas, triggering the formation of new stars. 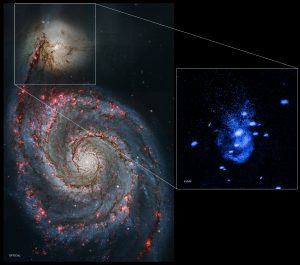 The inset shows a blue region of X-ray emissions from galaxy NGC 5195 as it collides with the larger Messier 51 galaxy, shown in natural color. (Credit: X-ray: NASA/CXC/Univ of Texas/E.Schlegel et al; Optical: NASA/STScI)

Researchers found a number of dual supermassive black holes, despite the difficulty in detecting these illusive pairs. Studying the pairs gives astronomers a better understanding of how large black holes grow and eventually produce the strongest gravitational waves when they collide. Galaxies are pulled toward one another through their strong gravitational forces. As they slowly come together, the black holes at their center spin toward each other, meandering at first, culminating in a swift and explosive merger, sending out gravitational waves in all directions.

Astronomers recently found five new pairs of growing supermassive black holes, where previously they only knew of fewer than ten such pairs. All of this thanks to the help of citizen scientists taking the time to help classify galaxies through Galaxy Zoo. Don’t let the hype of automated classification techniques fool you, people are still far better at identifying objects then automated systems. Whether you partook in Black Friday or #blackholefriday, space is for everyone to discover and enjoy.