From the Big Apple to Bend, Oregon, Vricon brings the data.

In November, we brought you a snapshot of Vricon’s 3D digital elevation model of Bangkok, a famous world city. This month we shift our focus to the Western Hemisphere, and specifically to urban areas within the United States.

Vricon has been working hard to produce data that hits closer to home. Indeed, their data may actually cover your home and office as they have produced over 2.8 million square kilometers (sq km) of the United States, including over 1,000 cities from the East Coast to the West Coast. These municipalities can be categorized as cities, towns and even boroughs. Indeed, over the past three months, Vricon has produced over 1.7 million sq km of new 3D data worldwide.

Vricon’s product suite includes 50-centimeter digital surface models (DSMs) and digital terrain models (DTMs), all of which are important for engineering, urban planning, design, environmental research, flood analysis and more. For example, let’s say that you work for an engineering firm that is managing various projects across America and flying LIDAR or collecting high-resolution airborne imagery to support these projects is beyond your budget. You can’t afford to fly or drive to each location on a moment’s notice. You can, however, use Vricon’s highly affordable and readily available 3D models and DEMs to perform a virtual site analysis, and thus save two precious resources at once – both time and money. 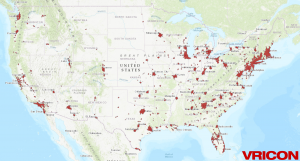 Given that everyone loves lists, we thought it might be fun to compare Vricon’s currently available 3D data to the largest cities in the US, courtesy the U.S. Census Bureau. Topping the list are New York, Los Angeles, Chicago, Houston and Phoenix, and Vricon has built them all. Check! We also looked at some of the fastest growing cities — Boise, Dallas, Greeley and The Villages — and we are pleased to report that Vricon has these covered, too. Check and check!

Because Vricon’s technology uses 1,000’s of pixels over a single point on the ground, they can offer the most accurate representation of your city, while keeping down costs. Check out Image Hunter to locate Vricon’s coverage of your city, or send us an email at sales@apollomapping.com for more information about this product suite.