The Soft Core of the Earth – Stomping Grounds

I’ve lived around the country a bit, occupying all regions except the Northeast: the Midwest, the Southeast, Texas, the Rockies, the Southwest, the Northwest and the Mid-Atlantic. Some areas have been far more enjoyable than others, some I’d love to return to, some I’d just as much assume to forget. I have a little more freedom with work than many, so I can bounce around frequently, but I always find myself longing for a return to the Rockies. The Front Range of Colorado, however, no longer has much appeal for me; it’s simply too congested there. The same can be said about the “ski belt” along I-70; too many people in too small a space. Any semi-metropolitan pocket of Colorado is just too overrun, and I imagine the same is true about other prized areas in the Rockies; certainly Salt Lake City, and I imagine the same for Bozeman and Missoula, Montana, Coeur d’Alene, Idaho, and even the areas around Jackson, Wyoming and Driggs, Idaho. People are drawn to beautiful places, understandably, but they’re also drawn to convenience and luxury – and, of course, to other people. Having grown up in the Midwest, I have always been baffled by those who have no desire to roam, not even for a little while, to places more majestic than the cornfields and prairies; I guess it just boils down to comfort. Those who have never left their home, regardless of where that is, just lack a sense of adventure – or they have a sense of attachment. Maybe both.

Anyhow, I like to wander, and I consider myself quite nomadic – as evidenced by my many moves. But as I’ve gotten older, I have less of a desire to roam from place to place, and I’ve also accepted that I’ll probably stick with my job on the Eastern seaboard for the foreseeable future, thus keeping me from my beloved “stomping grounds” of the Rockies, at least on a permanent basis. But I do plan to return, even if just for chunks of time here and there. It’s expensive to travel, especially for long stretches of time, so I need to figure out how I can make two months out West every year a reality without breaking the bank or living hand to mouth. I don’t have an answer yet, so I’ll keep looking. Fortunately, at least for this summer, I got lucky – something I’m not used to getting, but am thankful for the opportunity either way.

A friend of mine in my adopted hometown has a brother who owns several properties in Colorado; he’s a property manager and thrives on the ski and summer travel seasons. Well, he moved out of the country, and while he’s still managing his properties, the pandemic, coupled with him being offsite, has resulted in there being some openings at some of his properties in Summit County. So, my friend, well, she knew how much I loved Colorado and how I return every summer for a week or two and she gave me an offer I couldn’t refuse: come stay for free in Colorado for six weeks. No catch, no cost, no work exchanged, nothing. Just come do whatever it is I want to do out in Colorado (which is largely hiking and being surrounded by natural beauty). Of course I said “yes.”

I am writing from the balcony of my 3,500 square foot house burrowed off the beaten path in Breckenridge, about a 20-minute walk to town. There is a trail literally outside my front door that, if it were the only one I got to hike on, I would be just fine with, but I’m within 15-40 minutes of some of the most beautiful hiking and scenery I could ask for. So, I hike every morning, I do a little work in the afternoon – ahh, the benefits of teleworking – and I read and hang out in the evening, all the while basking in the glory of the Rockies. I really can’t complain. 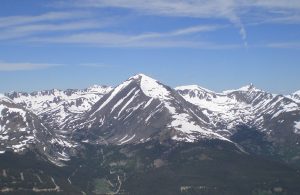 Above is Quandary Peak, one of the legendary “14ers” of Colorado, just a stone’s throw down the road from my summer squat.

The only tricky thing, for me, is not ticking off my friend. It’s sort of hard to go from hanging out with someone maybe 3-4 times a month to living with them 24/7 for six weeks, but hey, I’m trying to keep that in the front of my mind at all times. She did not need to invite me, obviously, and certainly she could throw me out at any point if she wanted to as well – hopefully she doesn’t though. We’re a week into it, and so far she has confirmed that I have not annoyed her yet – though she has indicated that I’m a little “snarky” at times, but I’m quick to remind her that she knew that long before she invited me to come stay with her. My guess is she really wanted to do this (obviously, she’s here, isn’t she?), but that she knew she might get a little bored by herself, and she probably wanted the comfort and safety of having someone around, especially to hike with. Every morning we’re on the road by 7:30am, typically on the trail by 8am or so, and then back home by noon. We’ve got three dogs between us, so we’ve got quite the pack when we head out. It’s nice. It’s comfortable.

At the end of June we’ll depart; she’ll head back to the East Coast, I’ll stick around the Rockies a little bit longer, and I’m curious what it’ll be like to walk away from here again – and to walk away from living with her. Now, this is a strictly a platonic arrangement, just in case you were wondering, but even only a week into it, there is a little bit of a feel of a married couple in some ways (in a good way). That’s probably me reading into it, but I guess it’s just like I said: it’s comfortable. It also probably doesn’t hurt that, so far, I’m enjoying myself immensely just being this close to all of this splendid beauty. That doesn’t hurt at all.

Nonetheless, I don’t want to annoy her, certainly now when we’re sharing the same roof, but also for the future when we both return to our separate lives in the same town a few thousand miles away. Because of this, I’m trying to be conscious not to get in her way too much, give her space, take off on my own when I can, etc. I plan to travel to the Front Range to see some folks (yes, that’s you, Brock!), and I may dip down into the Southwest corner to see a friend who now lives in New Mexico (side note: he and I moved to Colorado years ago and he also used to work with Brock). She’s going to take a day trip or two to Aspen, so hopefully we’ll see just enough of each other to have fun and continue to appreciate one another as friends, but still make space so that we don’t feel like we’re constantly up in one another’s business. More so me than her.

It’s going to be awfully hard to head east in July. I really like my job, it’s the best one I’ve ever had, so there is no other option. But still I wonder: what if I could find something to do out here, even if not as ideal as what I’ve got now; would it be worth it to live in an area I love far more than the East Coast? Maybe. I’m sure that’s something I’ll continue to think about the entirety of my time out here, and certainly on that damn near 2,000-mile drive home. Driving through Kansas, Missouri, Illinois, Indiana, Ohio, etc. sure does make you long for prettier parts of the country.

Well, here I am; I’m going to enjoy it. I’ll try to work on that whole “being present” thing, for if for no other reason, this is the place where I’m most happy doing so.