The Soft Core of the Earth – Excuses Not to See People

As I write this, the day after “Thanksgiving,” I’m reminded how much I really don’t like people. All the hubbub the past week or so has been around who is going where to see whom, all the special food they would consume, the hours spent relaxing in front of the idiot box, and of course the wild stories of the crazy uncle everyone expects to hear. This holiday weekend was said to have seen 1.6 million more people travel than last year, and the night before turkey day, Wednesday, is said to be the drunkest day of the year – there’s the one thing I can tolerate about this holiday: blacking out to forget about it. Do you know why it’s the drunkest? Because people will be forced to hang out with their extended families the following day for an ungodly amount of time. The easiest way to do that is to be incoherent and have your synapses on hiatus. Though, I don’t know why Christmas wouldn’t be drunker; it’s a way worse holiday, and everyone gets consumed by it, regardless of whether or not their religion aligns with its consumerist principles. My guess is around Xmas time we simply spread the drunkenness out over multiple days, whereas turkey day sees us overcorrecting because we don’t remember how much booze is necessary to get through it. By the time dead-tree-day arrives, we’re likely all inebriated in a constant fog of “spirits” – pun intended. But I digress, as usual…

Aside from a few phone calls and texts, I managed to not spend any “quality” time with anyone on Thanksgiving this year, something I am truly thankful for. Why do we have to spend time together on a predetermined schedule? I mean, I’m honestly not against socialization with family and friends, but I’d rather it be organic, and on my schedule, not “society’s.” All holidays are stupid unless you get a day off from work because of it, and that’s the extent of their value. Why do we need to celebrate anything because someone else decided we should, in this case, 160+ years ago? To me, this 4-day holiday weekend signals an opportunity to go at my own pace, to get caught up, to get ahead, to relax when I feel like it, to simply recharge. That simply isn’t possible if you’re overwhelmed by your family’s presence. 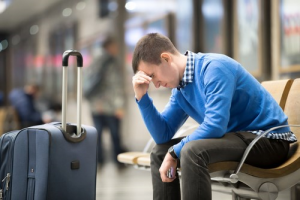 The annual rite of passage that accompanies all holiday travel – hating your life.

At this point, if it hasn’t already happened yet, you’re probably wondering what is wrong with me. Who did what to me to make me such a curmudgeon? I admit I often sound a little like Ebenezer Scrooge in this here forum, but I’m not all naysaying and gloom, no, sir or ma’am. I think I’m just becoming Zen – more refined in my own self and space, less needful of others in my life. Isn’t that what becoming an adult is all about anyways? Becoming self-sufficient and responsible? The response to that query, from many, would be, “No. It’s more than that. It’s also to continue to build lifelong relationships and treasure the ones you’re lucky to have.” Bah, humbug. You come in on your own, you go out on your own, might as well as enjoy a little alone time along the way – or a lot, as is my preference…

My point is that all of the buildup that we place on holidays is often accompanied by travel which is part and parcel with headaches and nightmares. Any trip that is more than across town is typically at the very least a hassle, and more often than not, an undertaking. When it involves traveling to see family that you don’t see often (and perhaps intentionally so), alongside potentially hundreds of thousands of other people doing the same thing, whether it be by plane, train or automobile, then what you have is a recipe for disaster – and hence why booze is so necessary to ease into the family gatherings and keep it lubricated throughout upon arrival. The travel just makes the holiday with family that much worse.

But really, it’s not just holiday travel to see the family that sucks, it’s all travel, regardless of where you’re going or who you’re going to see – or get away from. As I’ve written in these pages time and time again, I long for the day when I will no longer travel. I just want to build a nest of comfort in some beautiful, idyllic, secluded place and forgo all the hassles of ever having to leave home again. Sure, I’ll sacrifice a lot; there will be people I’ll never see again, places I’ll never visit, etc., but I’m okay with that, I think. I’m looking for excuses not to travel, not to see the places I’ve never been, not to see friends and family, and I think I might have found the best excuse yet: I’m trying to save the planet.

Yes, travel wreaks havoc on Mother Nature in so many different ways. It’s not just jet fuel and fast food debris, but single-use plastics, taken-advantage-of hotel housekeepers, and worthless souvenirs. But the fuel waste is the big one: it takes 3-4 liters of jet fuel per passenger to go roughly 60 miles by air. RIDCIULOUSLY WASTEFUL. I have a friend who prides herself on being an eco-justice warrior, yet she flies to 3-4 different countries a year to promote her cause. I love to call her out on this, and it’s even better because she knows she is a hypocrite. Side note: She also bought a $1,000 boutique dog after we spent hours talking about how many animals get euthanized at shelters. She’s a phony. But she’s a nice person, though I wouldn’t travel to see her…

We may think that if we carpool, or even take the train, that we’re “doing our part” – please. If you really cared about the environment, then you’d cut all non-essential travel. Does this mean you could never see your family who lives on the other side of the country again? Of course not! We’ll let you go to their funeral. Trust me, it will be easier to talk to them at that point anyhow… So, let’s do a recap: holidays are garbage, and forced socialization with family solely because it is a holiday is even more so; travel is wasteful and disastrous to the planet, but more importantly, on a selfish note, it’s a huge headache and entirely draining; and finally, we’d all be a lot happier if we greatly reduced the amount of time we spent interacting with the people in our lives who we don’t really want to interact with. There is too much obligation to do that in life. Just because you share the same genes or married into a dumpster fire doesn’t mean you to have sustain those “relationships.” We’re such a transactional society that we should accept all principles of economics and apply them to our social and familial life as well: return-on-investment is everything; cut those folks out of your life who aren’t increasing your dividends of enjoyment and sanity. It will be worth it.

And while you’re at it, try to be good to Mother Earth for once, will ya? You’ve been treating her like she’s disposable for long enough – wake up and make some changes in your life! I mean, maybe it’s YOU who needs to be cut out of the picture because YOU’RE not adding a whole lot to this Zen life everyone else wants to live.

I think it’s more than ironic that the holiday is called “Thanksgiving,” and that’s not just because of its roots in genocide (look up Day of Mourning for more), but because the only thing we’re really thankful about at that time of year is when it’s over. How many people say after a long holiday weekend with family, “Thanks god that’s over until next year”? Back before travel was easily accessible, folks appreciated seeing their dispersed friends and family because it only happened every 5-10 years or so. Now that it’s so easy and we do it so often, it’s caused us to not really cherish the opportunities because they come in such rapid cadence. My charge to you is: disconnect from everything. It will make you happier and the squirrels and jungle cats will greatly appreciate you not destroying their home any longer.