The Soft Core of the Earth – Covid Wasteland

Man, no one was happier than me when concerts returned after our long covid-imposed hiatus. I quickly grew tired of watching performances online; nowhere near an acceptable or equivalent replacement for “being there.” And this past May, once the mask ban was lifted and vaccination numbers were creeping upward, I (and I assume everyone else) was pumped for a return to “normal” – whatever that is anymore. But just as things were opening up, people were making plans, and bands were returning to the tour circuit, we had a regression: those vaccination numbers plateaued, and the delta variant came on the scene like a bat out of hell (pun intended, Wuhan). The thing is, the masses had already prepared themselves for the “return,” so there was no stopping it. Some more governmental bungling and you get us to where we are today; in some ways, not much different than we were 15 months ago.

I went to a few concerts in late July in the Red-state-northern Rockies and very early August in the Southeast (also Red) and Red-state Midwest, and while delta was certainly on the prowl by then, most (including me) didn’t really respect it. Shows with 10,000+ fans in attendance looked just like the 2019 summer; maybe 5% wore masks, and those were shed shortly after drugs and alcohol entered people’s systems. At the end of the month, things were a little different, though. Attending some more massive outdoor gatherings, this time on the West Coast (Blue state), there were considerably more people wearing masks (myself included), but in many ways the act of doing so was a sham. Not only because other safety practices were shed at the personal level, but because at the structural level nobody was attempting to make safe environments. For two nights in a row, I stood in a corral waiting to get into this overstuffed venue – it was butts-to-nuts for 30-40 minutes each night, and then virtually impossible to avoid coming into very close contact with others once inside. That it was outdoors certainly helped, and that the crowd trended heavily vaxxed did also (or maybe I’m just telling myself that), but close-quarters camping and shared bathrooms and showers on top of the freewheeling nature of being in a festival environment probably tipped the scales the other way. From sea-to-shining-sea, we’re living in a covid wasteland. 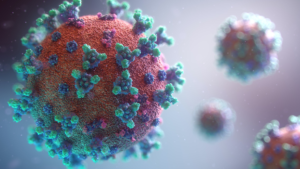 This 21st Century version of a Pong virus ball is bouncing all over the world – don’t get in its path! (Image retrieved from https://unsplash.com/s/photos/covid, courtesy of Fusion Medical Animation)

I should add that on this last trip I had to fly across the country, and while the “experts” claim the air on planes is cleaner than in offices and on other forms of public transportation, there are still other manners of getting ‘rona on a plane. As a slight aside, I hate everything about the act of flying as it is, so add to that a greater disdain for my fellow passengers, an uncomfortable mask tied to my face for 5-6 hours each way, plus a fear of touching anything other than my own stuff, and it didn’t make for a very enjoyable vacation. I guess I signed up for it, though…

I don’t see this getting better anytime soon either. I hear the lambda strain is on the rise, and, of course, flu season is just around the corner, too. Time for a confession: I’m clearly not an anti-vaxxer (I got the weak-ass J&J jab), but I couldn’t tell you the last time I got a flu shot. Every time I was asked why not, I always said something along these lines: “I never get sick” or “They never get the right strain for the vaccine” or “If I got sick it wouldn’t be that bad”; all of which may be true (or close to true). But it does give me pause because I’ve said the same thing about the flu vaccine for years that people who don’t want the covid vaccine say now. So, what does that make me?

I guess it makes me have to reconsider – but let’s be honest, I probably won’t change my stance on the flu vaccine anytime soon. I also hemmed and hawed about the corona vaccine. I got it in March, mind you, but I was very wary of the MRNA versions, so felt lucky when my employer got the J&J “tried and true” technology – which obviously has turned out to be less so. I also claimed at that time that I would get the vaccine, for numerous reasons, but chief among them were that I anticipated that airlines and concert venues would require them; that is half true. I said I wouldn’t get a booster way back when (5 months ago) if they were recommended; now they are – and I likely will. But I’m also forced to wonder what will happen if the remaining 30% of abstainers never get vaccinated; will we all need seasonal jabs? If those fell out of favor for me with the flu, why wouldn’t they for covid, eventually? I’m a walking contradiction, no doubt, but I’m also beleaguered by society. That’s out of my control but certainly no reason to relinquish my responsibility… I went to a massive outdoor show in the Mid-Atlantic region in mid-August, and they asked for proof of negative test within 48 hours or a vaccination card, though they never matched the name on paper to the face on my ID. In the West, this was different, but with so many fake vaxx cards floating around, I guess it almost doesn’t matter, does it? I’ve seen some of my most virulently careful friends at the start of the pandemic become some of the laziest, most apathetic about it now. Where do I fit in? Well, I’m no longer double-masking, wearing gloves in the grocery store, or wiping down my groceries when I get home, and I’ve returned to in-person dining, so I guess I’ve let down my guard. Does doing so make me “one of them”? Eww, gross…

I used to be the type of person who would argue that famine, diseases and wars were good things because they helped keep population numbers down – I guess I still am. Just like Bob Barker said, “Have your pet spayed or neutered. Help control the pet population.” Though, I have come to accept that that is a pretty grim way to look at the world. That doesn’t mean my thinking has changed, just that I’m aware it’s not a very popular opinion to hold. Still, Darwin argues for the survival of the fittest; maybe thinning the herd Is natural, even if sad. I know what you’re thinking: I wouldn’t be saying this is if it happened to one of my friends or family members, and certainly not myself. You’re right: I would likely find that devastating. You’re wrong, too: I would still stand by my position. I had a professor once, a scholar of medical philosophy, who queried the class on the foolishness of saying “Why me?” when struck by a serious illness or trauma. Instead, he said we should be asking, “Why not me?”

We’re all here for a short time. Most of us will never know when our number is called. The only thing I can hope for is it goes quick. The only thing I ask for is that I have some control over it. Getting a deadly virus from a stranger is not entirely within my control, but my behaviors and decisions that factor into where I am and who I’m with do. So, I can take all the precautions I want, but are they really precautions if I’m still putting myself in harm’s way? No, probably not. But I – we – have all been restrained for “too long,” and I – we – are all greedy pigs who want what we want, when we want it. I want to go to concerts. I’ll just have to wait and find out if it was worth it. Covid wasteland, indeed. Will I be wasted, too…?