The Soft Core of the Earth – Big Brother vs. Stockholm Syndrome

Technology firms have too much power. The issue that needs to be further addressed is how much more of our private lives will we be willing to cede to corporations – and the government. In Shoshana Zuboff’s brilliant 2019 book, The age of surveillance capitalism: The fight for a human future at the new frontier of power, she eloquently details the concerns that every American should have about the major tech companies’ unseen influence in our lives, especially Google and Facebook. Zuboff chronicles the practice of “dispossession” that Big Tech and social media companies practice on its users, equating the application of data mining to that of “simple robbery” where tech companies track every move you make online to predict your behavior in order to increase their reach and improve their bottom lines. Of course, under surveillance capitalism, people don’t willingly share this information; it happens under the cloak of darkness, leaving users ignorant of their own exploitation.

Google, Facebook and their ilk are not service providers, but surveillance mercenaries that track, predict and ultimately seek to control the users of these platforms by mining their habits and turning them into statistics. We’re often duped by “personalization” campaigns which are born from stores of behavioral data collected from every user. In 2009, it was made public that Google maintains its users’ search histories indefinitely, and since we have unquestioningly accepted technology as a necessary aspect of our lives, it is unlikely that we will make the effort to disallow these practices. In 2015, it was found that anyone who simply visited any of the 100 most trafficked websites would come away with more than 6,000 cookies on their computer, 83% of which came from third parties unrelated to the site visited. The takeaway is that we’re careless and blindly trusting of Big Tech – they feed off of us in some form of twisted cyber-parasitism. 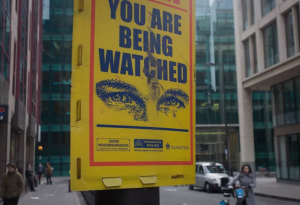 There are no such things as freedom or privacy any longer.

Knowing that we’ve all been giving up our most private, personal information to cyberspace for decades, and there is no sign of our collective desire to fight this invasion in our lives meaningfully, are we also going to roll over and let Government gain access, too? Clearview AI, a facial recognition company, claims to have established a database of more than three billion photos and images scraped from social media platforms and other websites. According to Popular Mechanics, hundreds of law enforcement agencies, including the FBI, are already using this technology to create portfolios of the citizens they’re charged with protecting – even though numerous cities have banned the technology, and other states have issued cease-and-desist letters or entertained lawsuits against the company (and this form of technology).

To those who have been paying attention, this is scary. Numerous other Nations have already widely adopted facial recognition technology to use against its citizens; China being the number one user, and provider, of this invasive, Orwellian form of social control. China has already contracted with Uganda (police), Mongolia (prisons) and Zimbabwe (airports) to sell these countries the necessary technology to monitor and collect private information of people in their public places. China has gone so far as to use the technology to create “social credit scores” that can prevent its citizens from maintaining certain otherwise taken-for-granted rights, like getting a loan or taking a flight, if you trespass against social norms instilled by Big Brother. Simple acts like quarreling with neighbors or jaywalking could have significant penalties that might lead to social ostracization, and possibly eventually, worse.

The sad truth is, even in the United States, we all see ourselves as powerless to the imposition of Government and Big Business; most of us are aloof. We are content to waste away our time, ever pleasured by the wonder of technology and the easiness it brings our lives. Time has always been a fascinating concept for me, and I’m often troubled by how frequently people choose to waste theirs. While some do go out into the community to volunteer, or perhaps learn a skill or hobby that will enhance their quality of life, most simply choose to plunk down in front of the TV and stare blankly at the idiot box while it spews out endless garbage and alternative facts, or sift through their endless, and pointless, social media threads. If it’s true that time is money, then what the masses choose to spend theirs on is the equivalent of sugary drinks with no nutritional value.

So, why should we expect anyone to really care that the tech companies we rely on to script our lives and the technologies they make that fall into the hands of an untrusting (and untrustworthy, regardless of political party) government? I don’t have an answer for that. We’re all complicit in allowing Tech to consume us, privatizing the public spaces of our lives; think of all those Google cars, planes and drones that take pictures of whatever they want and make them freely available to whichever nefarious force seeks to use them to their advantage. Those cameras on city lampposts that are supposed to make us safer? Just another way to capture data on the unsuspecting. But it goes far beyond that. We’re being watched everywhere we go; there is no privacy anymore. It can be as simple as your favorite email account or search engine sending you targeted ads based on your keystrokes; or it might be your cellphone provider storing every text and picture you’ve sent over their platform. That’s just the beginning, folks, but the beginning started an awful long time ago.

We’ve given it all up willingly, and it seems we’ve got to the point where, even if we were aware of this, we’ve stopped caring. The roof is on fire and I guess we’ll let the motherf@$%er burn. We sympathize with our captors, but also worse: we aide them in their efforts to commodify and surveil us. To paraphrase the great cartoon possum, Pogo, “We’ve met the enemy and he is us.”