The Soft Core of the Earth – Ants

People are the worst. I like them on a case-by-case basis at the individual level, but on the aggregate, I can do without them. That doesn’t mean the things they do can’t be endlessly fascinating, but for the most part, humans are the most destructive parasite there ever was (myself included), and this planet would be a whole lot better off without us. Unfortunately, that’s not going to happen anytime soon. It seems we need to do a whole lot more damage before our collective time is up. But this month’s column isn’t about how much I hate humans, it’s about another pest that has entered my life, ants. Well, gnats and ants, both.

About five years ago, I had a beautiful sunroom built onto my house, and it’s where I spend up to 80% of my waking hours when at home. It’s not climate controlled, so it does get a little toasty in there during the summer months, but eight months of the year it’s quite fantastic. I work there, read there, listen to music there, and often just stare out at my backyard and all the creatures that use it for their livelihoods and foraging activities. If I had to give one word to describe it, I’d say it’s peaceful.

Sometime in mid-May, as the temperatures began to soar, I started to notice a collection of gnats gathering at the top of the sliding glass doors between 3-6 p.m., the hottest hours of the day. I’d kill them but more would come back until the sun passed over the house, and then in the early evening, they’d be gone – until the next day. Now, I have no problems with insects if they remain outside (except for mosquitos – I hate them everywhere and all the time), but once they cross into my territory, not only do they drive me crazy, but they make me mad. And as much as I don’t like to dump chemicals into the soil around me or the air I breath, I thought that was going to be the only remedy. Slight tangent: in the weeks before my gnat problem, I noticed several clusters of poison ivy in my backyard, but I didn’t want to spray them with Roundup because I knew that would kill the pollinators, so I used white vinegar instead (it hasn’t really done a whole lot). So, hopefully that attests to my desire to live chemical-free as much as possible. However, invasive pests in the house, well, then it’s all-out war.

An inspector came by and did the assessment, and he said he’d send out a technician to spray the perimeter of the sunroom and “dust” (i.e., spray noxious chemicals) the panels on the sliding glass doors where the gnats congregated for their daily acts of annoyance. I happened to mention that I had some ants harboring around my air conditioner, and while I wasn’t greatly concerned about them, I might as well have them attended to as well since someone would be out “dusting” my property with chemicals. The inspector agreed, suggesting they just spray the entire perimeter of the house, and that was to be a few days later. In the interim, the gnats continued to “bug” me during their afternoon happy hours and the ants continued to bask in the dark, cool recesses around my air conditioner. It was a standoff, of sorts. 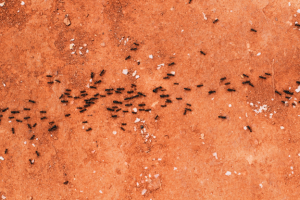 These ants will be my downfall. (Retrieved from https://www.pexels.com/photo/black-ants-lining-up-2563028/, image comes courtesy of Andre Moura)

Well, the technicians came and did their business, spraying copious amounts of a lethal concoction, and throwing down a bunch of “ant pellets” which I gather are food they supposedly eat and take back to the queen. Fine by me, I thought. After they left, I had the sensation of a small burden taken off my back; it was good to have my sunroom back to myself.

The next day, less than 24 hours after the chemical bombing of my yard and beloved sunroom, I noticed in the corner of the room a pile of dozens of dead ants – plus another dozen or so live ones walking about. And that dozen replenished itself over the course of the day.  I’d never had more than a single random ant or two cross the threshold into my chambers, so this was beyond unusual. To add insult to injury, the gnats fluttered around the glass doors in the late afternoon. Immediately I called the provider, trying to keep my frustration in check, but you know how customer service agents are: they find a way to rile you up even if it’s not intentional (though, I’m fairly certain it’s always intentional). I bitched and moaned and was supposed to get a call from their regional manager, but this was the Friday of a three-day holiday weekend, so I knew I was SOL. (This wasn’t unusual for this company, as I felt I was getting different stories from whomever I spoke with up until then anyways; that should’ve been a red flag, I guess.) So, I knew I’d be fighting two enemies over the weekend, and by the time the three days had passed, I’d probably killed 30-40 gnats and 125+ ants. I quickly learned to stop spraying them with soapy water and wiping them into a paper towel and used a vacuum to suck them up instead. A much more efficient, and cleaner, process.

As I write this, the day after the holiday weekend, I’ve already spoken with the regional manager, and another technician is to come tomorrow. It seems they’re going to try a different spraying strategy for the ants, but the gnats, he said that was a “hygiene” issue. Not that I’m “nasty” as he put it, but either there is some decaying animal or plant matter that is attracting them. He said I can kill all the gnats I want, but it won’t do a bit of good until we eliminate the host. Who knows what or where that it is? The contractor who built my sunroom put a moisture vent on the bottom, as the structure sits on a cement slab, and his rationale was that if moisture gets under there, it needs to dry out. But I think what that entry point has become is an open invite to a condominium for insects of all sorts because it’s nice and cool down there. I also think there might be some skinks (think Geico lizard) that have moved under there as well, and some of them probably died down there, making a good breeding ground for gnats. All speculation of course, but as I continue to be driven crazy, I must have my theories. Still, I’d take my ant and gnat problem over humans any day.