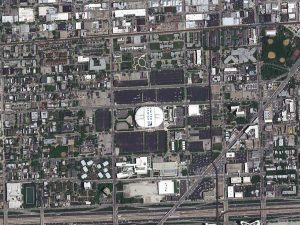 A 50-cm color image of the United Center in Chicago, Illinois, USA collected on June 29, 2018 by Pléiades 1B; and then a 1.5-m SPOT 6 image of the same stadium collected on May 24, 2018. These images have custom processing and color balancing applied by Apollo Mapping. PLEIADES © CNES 2019, Distribution Airbus DS. SPOT © Airbus DS 2019.

About the Venue: Located in Chicago, Illinois between the neighborhoods of West Town and Little Italy, the United Center was built with private funds invested by Jerry Reinsdorf, owner of the NBA team the Bulls, and William Wirtz, owner of the NHL team the Blackhawks, at a cost of approximately $145 million. At a maximum capacity of 23,800, the United Center is one of the largest indoor arenas in the United States. Designed by HOK Sports Facilities Group and built by Morse Diesel and Huber, Hunt & Nichols Inc., the arena opened August 18, 1994. Being home to two different sports teams adds an extra layer of complexity to managing the stadium as you can see in this graphic of the transition from an ice hockey surface to a wooden basketball court.

Fun Factoids: (1) The men’s basketball tournament for the Big Ten returns to the United Center from March 13 to 17, 2019 for the first time since 2015 and for the 10th time in the history of the event. In 2015, the tournament was won by the Wisconsin Badgers in an 80 to 69 overtime victory against the Michigan State Spartans. (2) Cheering, yelling and whistling are common during the National Anthem, with recorded volumes reaching 122 decibels in the United Center. (3) The United Center replaced the Chicago Stadium which was built in 1929 for just $7 million. It sat about 18,000 fans (depending on the sport) with a total square footage of 600,000; while the United Center seats 20,500 with a massive total square footage of 950,000.