Last month we checked out the site of an early-season NCAA college football rematch right in our backyard, and for the October Pléiades 1 – SPOT 6/7 Stadium of the Month we stick with the college football theme, heading to the site of a Big 12 tangle in Dallas, Texas, i.e. Cotton Bowl Stadium. 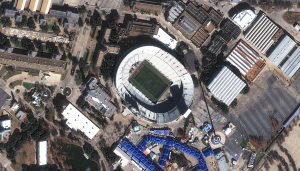 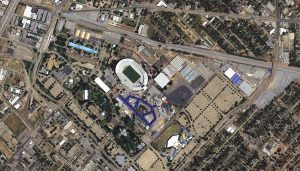 A 50-cm color image of Cotton Bowl Stadium in Dallas, Texas, USA collected on January 2, 2017 (the day the 2017 Cotton Bowl was played at AT&T Stadium, how sad!) by Pléiades 1B; and then a 1.5-m SPOT 7 image of the same college stadium collected on July 28, 2015. These images have custom processing and color balancing applied by Apollo Mapping. PLEIADES © CNES 2019, Distribution Airbus DS. SPOT © Airbus DS 2019.

About the Venue: Originally opened as Fair Park Stadium in 1930, the name was officially changed to Cotton Bowl Stadium in 1936. Built for just under $330,000 and opened with 45,507 seats, after a 2000s renovation that cost $57 million, the football stadium is the ninth largest in the nation boasting 92,100 seats. The Cotton Bowl is located in historic Fair Park which is a mile or two east of downtown Dallas. The park was opened in 1886 and was declared a National Historic site in 1986 – and is well known for its Art Deco buildings that have remained intact since they hosted the World Fair in 1936. While the annual Cotton Bowl Classic moved away from the historic stadium in 2009, it still hosts the annual Red River Showdown between the football teams of the University of Oklahoma and the University of Texas.

Fun Factoids: (1) This year’s edition of the Red River Showdown kicks off October 12th at 11AM local time with both Oklahoma and Texas holding preseason top 10 rankings. Oklahoma is the early favorite according to ESPN but in a matchup this wrought with emotions, you can throw rankings out the window! Texas currently holds a commanding lead in the annual match up with at 62 – 47 – 5 (wins – losses – ties) record. (2) Despite $57 million in renovations and expansion projects, the Cotton Bowl Classic was moved to AT&T Stadium by a 2007 unanimous vote of its Board of Directors in hope of being selected to host College Football Playoff games (which it was eventually was). (3) Did you know that the Cotton Bowl has been home to two NFL teams? The Dallas Cowboys played 12 seasons here from 1960 to 1971; and then so did the Dallas Texans in 1952 before folding as a team.